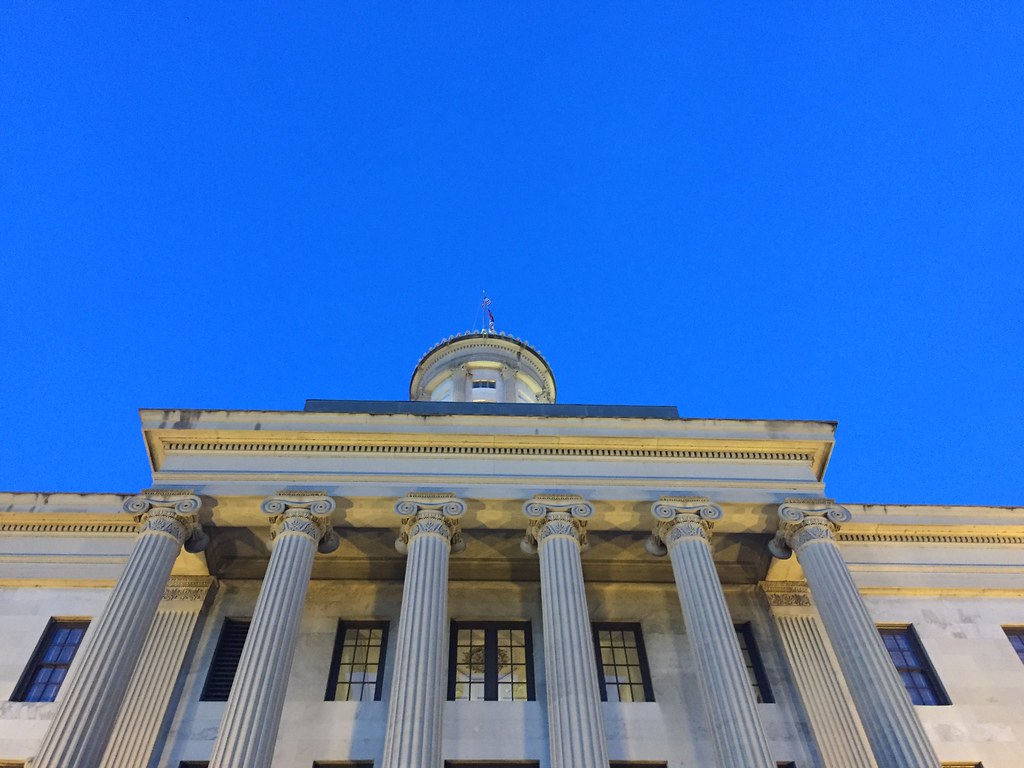 I stepped off the bus a few stops early from the station because I wanted to see if I could catch the tail end of the “Moral Mondays” demonstrations at the capitol building. I realized quickly that I had always come through the tunnel from Legislative Plaza and that I had no idea how to get in.

My phone read 5:35 p.m., so there was little point in going in anyway. I walked around to the west entrance (all the others are closed off) and went through the security line. The State Trooper asked me where I was headed, and I simply said “looking for the crowd of people.” By the time I walked upstairs, there were already people walking down them, headed for home or back to their office.

I stood there for a bit while the House let out of session. There were roped off areas and staffers milling about. Across the hallway, a single handmade sign had been left behind, reading: “Marriage is Equality”. Having come from work, I did not have a sign. Then again, my timing was not great either.

All politics is local

So, why go to the capitol in the first place?

A few days prior, I was sitting with a friend who had gone the first week. He supported what the protesters were saying, but felt awkward and that those “national issues” were unrelated to what the legislators were considering. It is not likely that Tennessee will have a section of a border wall, nor is it likely the senator from Sparta is having much influence on immigration law in DC. “They seem to be wasting their time,” he told me.

I explained that those issues were still very important, especially at the state level. State legislatures like Tennessee have made a point of either attempting to block federal laws they disagree with or opting for stronger versions of the ones they like. All national politics is local, and vice versa. Nashville is home to an outsized immigrant population (Kurdish and Somali refugees in particular). Bills considered the year prior attempted to block Tennessee from accepting any more refugees, mirroring action taken in the US congress.

Understanding the “point” of protests

I believe it is critical to understand where protests and demonstrations fit in our democracy. I would argue that they come second only behind a free press. The First Amendment is a brief but important cornerstone of why America endures:

Congress shall make no law respecting an establishment of religion, or prohibiting the free exercise thereof; or abridging the freedom of speech, or of the press; or the right of the people peaceably to assemble, and to petition the Government for a redress of grievances.

In fact, when things are working1, protests are not necessary. A bad bill will be torpedoed in committee if a state elected official gets a handful of calls in opposition to it and fewer in support. Advocates for years have asked for calls and letters to advance their cause. Protests would be seen as a last resort for particularly egregious legislation.

What is worth protesting?

As it turns out, there has been a lot of such legislation this session. Given the supermajority in both houses, there is little that stops these bills from advancing to the Governor, who has shown little desire to irk his fellow Republicans while positioning himself as a moderate.

As seen on TV

After a few anticlimactic moments of watching people leave the House chambers, I decided to call it a night and catch the next bus home. Two days later, a group of protesters would interrupt a press conference by Sen. Beavers and Rep. Pody re-introducing the quixotic same-sex marriage ban. This prompted accusations of vandalism (there wasn’t any) and calls to increase the security of the building for these manufactured anecdotes. Just two weeks prior, Sen. Bailey claimed that all the protestors that attended the annual State of the State Address must have been paid professionals (his imaginary friend told him).

Why so much animosity towards protestors?

My working theory is that the elected officials wanting to keep protestors as far away as possible – or under somebody’s car tire – know that what they are doing hurts people. They have been gleefully going about it for years, ignoring the bad press and going back to their districts and glad-handing with a handful of people that agree with them. But this year, in this political climate, people of good conscience have had enough of it and want be seen and heard.

There are parallels here with the “Tea Party” protests that happened after the 2008 election. Even though I disagreed vehemently with what they were saying3, I fully supported their right to say it.

Because that’s the American thing to do.