A 5K with bacon 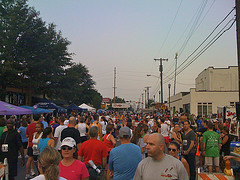 An East Nashville co-worker suggested a simple flow chart to answer the question, "When is the Tomato Art Fest". It only needed two paths to answer the question, "Is it the hottest weekend of the year?" If the answer was no, it was obviously not time for the Tomato Art Fest. It comes as no surprise that the moment I stepped out the door this morning for the festival's 5K road race that I instantly broke a sweat.

I drove my car a street a few blocks from the starting line, a point bemoaned by my wife and her friends. Sure, we live a little over a mile and it would have been an easy walk in anything other than this oppressive heat. Even if I had braved it, the "getting home" part would have sucked after the race was over. I also needed the car as a place to leave my wallet and keys, as I do not think the post office would appreciate it very much if I used my PO box as a locker.

I searched around for the registration table, finding it right next to the starting line. When I picked up my packet, I noticed that Samantha's name was still on the list, and that her bib had been printed. We had arranged for a friend of ours from college to take over her number, but it apparently was too late to get the name (and gender) changed on the registration. I went on, but I was already fairly sure what was about to happen.

The mayor was the grand marshal for the race, announcing "I'll give you guys the same advice I use for myself: start the race slow, and finish slower." I joked to myself if this was also his campaign strategy when the convention center opponents go to the polls next summer. We were off, and I set into my usual race strategy -- keep pace with the "casual runners" until I need to let up a bit. That lasted for about a half mile for this one, as we started hitting the more hilly areas of the East Park area, and realizing that some of the crowd I had been running with had trained quite a bit more than I had. The East Nasty runners group was out in full force, so I tried to avoid setting any benchmarks that I knew I could not hit. Seeing one of their shirts usually indicated such a benchmark.

As we rounded 6th Street to head back towards Five Points, my one mile time came in at 12:37 (if the time keeper was to be believed). If I could have that pace for all three miles, I would be a lot happier with how I do in 5Ks. My goal is to consistently get below 40 minutes, and then pick a target that will probably not go any lower than 35-36 minutes. My 200-pound body is a bit tough to lug around, even with long legs.

Around the halfway point in the race when the course goes by Sky Blue Cafe (the owner goes to our church), the smell of bacon from breakfast wafted out into the street. I think I would have put up a sign that said "Too hot to run? Come inside for BACON!" She probably would have had at least a dozen or so folks take her up on the offer.

As we made the final series of turns to go back towards Five Points (after running through a sprinkler that one of the homeowners along Fatherland has mercifully pointed over the sidewalk), I encountered the unexpected. There, standing along the street was a woman in a red apron with a pan and a pair of tongs. She simply said "Bacon?" This mystical woman was offering that very thing I had craved 10 minutes earlier. My first thought was that I was hallucinating, and that I had actually fallen over in a ditch somewhere along the course. I took the piece of bacon, thanking the Bacon Lady and ran on. She continued to offer it to other runners, so I at least have other witnesses that can verify my story.

Bacon was a bad choice, by the way. My stomach, already jostled from two bottles of water and two miles of running, did not react well at all to the sudden influx of greasy goodness. It tasted great though, so I cannot say that I necessarily have any regrets. Another couple was talking across the street ahead to their neighbor about inviting them over for Bloody Marys. One runner stopped and said "Bloody Marys? What house number is this?" The unamused guy said "You're on Russell Street."

We were on Woodland.

I tried my best to run the last few blocks, making that the toughest fifth of a mile I think I have ever tackled. Nothing -- lungs, back, legs, feet -- on my body wanted to do that. I plodded across the finish line, watched my run tracking app crash and did some quick math. I came in at 43:33 according to my phone, but my chip put me in at 42:52, certainly not my best performance of the year, but not too far off pace from my other races.

We do not have any other races scheduled for the fall yet, but I am certainly looking forward to the cooler weather.