Ask you a question 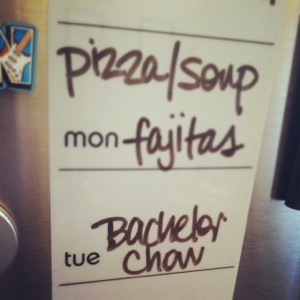 The walk between my car and the front door of our apartment is where you usually find me mid-thought. My pulse was still elevated from a hectic day at the office and fighting traffic to make it across the river. "'ello," I said out loud as the door opened. "Right." I remembered it was just me tonight.

I joked with Samantha a while back that she was as essential to me as the air I breathe -- and likewise was a subconscious, involuntary behavior that I rarely focussed on. I stopped for a moment and realized I had just greeted an empty apartment. She is presenting at a conference in Florida tomorrow morning.

I walked in to the fridge and saw the Futurama reference describing tonight's solitary dinner plan. I turned on the television and caught part of the news.

I have all but stopped using the Internet at work for anything not work-related. Not that my boss or coworkers would care. I simply don't have the free time or brain power to share. I go a month or more without a Facebook post, and reading my shrinking Twitter feed still takes up time I would otherwise spend posting. That is down to two or three times a week.

I finally looked up from Olympic coverage to see it was 9 p.m. I decided to go grab food and swing by the post office.

As I walked in to the Woodland Street postoffice, it dawned on me I wasn't likely to be alone. I rounded the corner to our PO box to see a woman sitting on the floor with all her personal belongings spread out at her feet. "I'm in you way, aren't I?" "No, you're alright." I unlocked my box, grabbed the package that was stuffed in there and headed back towards the door. "Have a good night," I said as I went back around the corner.

"Sir, I don't mean to intrude, but can I ask you a question?"

She hadn't stood up and couldn't see me as I stopped. I didn't go back. "I gotta head on," I said, shuffling out the door. I couldn't make out what was said after that.

I drove toward Taco Bell, shaking my head. An oncoming car pulled out of the auto diesel college with it's headlights off, garnering the attention of a nearby patrol car. I ordered my "bachelor chow" and came back home to again watch the Olympics. I'm sure I could guess what that question was, but now I'll never know.