Have a little help 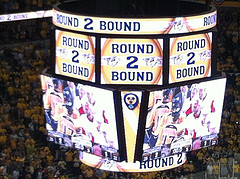 As the regular season was drawing to a close, rumors swirled that Alexander Radulov could return to the Nashville Predators after a four-year hiatus in the KHL. I was skeptical that it would happen, and I really did not believe it even had happened until I saw a picture of Radulov sitting on a plane bound for the United States. In the coming days, I watched the press conference and even checked in on an Internet broadcast of his first practice. If you have never been to a hockey practice, it can at times be as thrilling as watching the paint dry.

But aside from verifying that he was in fact still the same hockey player and not some impostor that David Poille had hired to scare the rest of the Central Division, I noticed something else. There was David Legwand, the first draft pick of the organization, spending an inordinate amount of time talking to Radulov after every drill. The truth is, while Radulov walked into that locker room knowing quite a few of the familiar faces, the organization had changed a lot since 2008. The on-ice product was at a different level, a host of trade deadline acquisitions were there and the media spotlight had finally located Nashville on a map. So there was Legwand, talking to Radulov a lot during that practice despite not spending a lot of minutes as his line-mate. Legwand was making an investment.

The first Nashville goal was a feed off the end boards from Legwand directly on to Radulov's stick. The game winning goal in first few seconds of the third period had Radulov dishing it to Gabriel Bourque and Legwand burying the rebound off Jimmy Howard. That one would stand for the remainder of the period, and it was all over but the handshakes.

So there is a lesson in the middle of all that hockey talk. Legwand invested a bit of time and energy in helping an old teammate get up to speed with his new teammates. Thanks to that, and a simply superhero goal-tending and defensive performance, the Nashville Predators closed out their single biggest rival and wait for the next opponent.