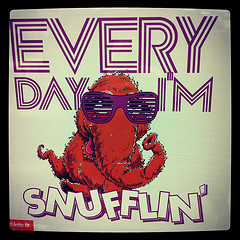 It feels a lot like Old Man Winter was particularly lazy this season, barely dropping the temperatures below freezing for a few days and not giving us a notable snowfall at all in the mid-state region. I think he just mailed it in to make way for an um-holy summer swelter that is all but certain. The pollen count has decimated me quite a few times already this month, and failing to take my assigned medicines and sprays renders me a 6'2", 200-pound pile of worthlessness for a job that requires a fair amount of cognizant thought.

One thing that did come along with that whole "in like a lion" business were nasty thunderstorms. One of which in particular broke two windows in our now-departed office space and turned my new Honda Civic into over-sized black golf ball. With $2,000 worth of damage and only being two months old, I had no choice but to have it fixed. Luckily that coincided with our office move, so Samantha could drive me into work for those days while it sat at the shop. I had no idea how long body shop work typically takes, but apparently even doing cosmetic dent repair takes three full days, and probably could have stretched into a fourth if they had not been doing countless other cars with the exact same procedure. So I guess that is a milestone of growing up -- first run-in with the insurance claim and waiting on repairs. I am happy with how it turned out, so all I am out is three days without a car and a couple hundred bucks.

Tonight the hometown hockey club throttled their timezone counterparts in Chicago 6-1. Any of the struggles the Nashville Predators have faced of late have been how to wrangle a lot of new talent into an existing defensive scheme. Whatever they are doing, it appears to be working. The return of the Prodigal Predator in Alexander Radulov has created a buzz on and off the ice. I would love to be a torch and pitchfork salesman outside the league office if this trend of a point-per-game continues, because every general manager in the NHL is going to want one for their march right up to Gary Bettman and Bill Daly's office. "How could you let them add talent like that after the deadline?" they'll ask. If the public comments and familiar refrain from fans of the 29 other clubs is any indication, they are still steamed over the very lucrative offer given to Radulov to come back to play for Nashville -- help us win a cup, and we'll count a year off your contract and let you become a restricted free agent in the summer. It's win-win for Radulov, and if it ultimately leads to a deep playoff run, it's win-win for the Predators as well.

I am nearly as fascinated by what happens off the ice with this team as I am the on-ice product. It is a business with metrics and personalities that all must be measured and accommodated for.

So here comes the spring. Playoff hockey and warmer weather come with it. We our almost settled into our offices down in the Gulch. It is an exciting time because it is just the start of a lot more excitement. With it will bring anxiety -- huddled in hallways as tornado sirens blare; trying to will the next goal to come before time expires; pushing hard for deadlines to be met and to get the product out the door -- and that is just what can be anticipated.