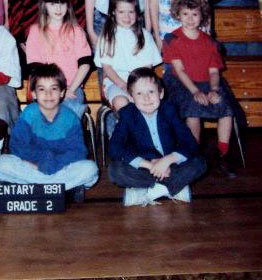 Tagged in this photo a few days ago by a former classmate.

Hey, kid. Yeah, you in the blue jacket and the white sneakers. Come'er for a second. ... What's up with the goofy smile? What are your plans in twenty years, kid? What the hell happened back then to get us to now? Who are all those people? What's their story?

Welcome to 1990, age 7. Most of the kids on the bleachers behind are about a year older; it is what happens when one is born in late August. You are looking at about half of the typical sized class year for Greenfield Schools, the only school in a town with a population 2,105 according to the census taken that year. Twenty years later it had grown by just 77 people.

You are also not looking at future US Senators or Nobel laureates ... at least not yet. These are the children born during the recession of the 1980s in an area that has not seen its last heyday since the 1950s. It was during this time that the little guy there in the blue blazer would go with his grandfather to the feed store on Front Street. Quite a scene, really. On this particular day it was as if the sun was breaking through the clouds from the high windows into the dimly lit building. Adults would talk whatever business talk they did, and I would wander around, making shadow puppets on the dusty floor.

The store aptly smelled like a barn and the knots in those wooden floors had fallen through into a pitch black area underneath. As my grandfather would talk to the clerk, I would bend down and drop loose seed down into those holes just to see what happened. I would ponder the abyss that was under the old building until I heard my name called and the sound of him heaving a bag of horse feed over his shoulder as he walked back to the truck. Years later it would be razed because, as you might have guessed, it was falling apart. Other than a nearby HVAC repair shop, it is still a vacant lot. Just like concrete circles where the grain silos once stood across the street, next to the railroad tracks.

All monuments to something.

For a rural school system, the elementary school was about all you ask for: clean classrooms, a big gymnasium and a good-sized playground. The kids in this photo clearly represent the byproduct of a couple of days notice that school pictures were being taken that day. I sincerely doubt that big-cheeked kid in the blue blazer wore that jacket very often. Second grade is a big time. Your memory becomes a bit sharper, and friendships start to have a little more context than, "Yeah, you're that girl that has the shoes with the orange stripes on them. I remember you!" Try conveying your deep-rooted friendships based on what shoes that person wore to your parents at the end of a school day.

My house was just around the corner from the school, so I did not have a bus route. Most of these kids did. There were quite a few that lived out on postal routes that were either known only by a number or a half dozen family names that tried desperately to win recognition for what the road was to be called. E911 requirements upset a lot of people when the names were codified, and there was to be no dispute or other markings.

So, what about this kid?

Never mind him. You can tell in the picture he hasn't a care in the world. The teacher, on the other hand, had her hands full. Twenty four kids in a classroom from 8 a.m. to 3 p.m. (an hour during lunch and perhaps a respite every other day for a music class or something) is certainly a challenge. I checked the other day and saw that she had retired in 2004 after 41 years as an educator.

But who are these people? The names are familiar, but that is about it. What I can tell you about the handful of folks I recognize in this picture is that most have started families. As a matter of fact, a good portion of the children of this generation are now in the second and third grades. Some will be sitting in a classroom tomorrow morning, maybe even thinking about that upcoming picture day in the spring. Many are living in this small town or a neighboring community. The school has changed a lot, and oh wow has the world changed since this picture was taken. Some have moved off to other states. For the most part, the kids are all right.

But here we are. To be honest, I do not really know much about the short guy in the blue blazer. I can tell you what toys he liked, who he was inexplicably fond of, how he had his fun when left to his own devices; That he would go just about anywhere his grandfather wanted to take him. It is not really a worthwhile endeavor to reconnect with your childhood, but I still want to be as happy as he looks in the photo. I also think I want go out and buy a blazer, too.

Maybe not that color.