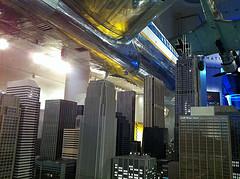 Short weekend trips are probably my favorite kind of vacation. For one, we are often paralyzed by the thought of getting away from home for weeks at a time, both in the expense and the sheer amount of stress it would take to get us to a mental milestone to "let go" from our responsibilities. I wonder what it would be like to live in certain European countries that with an abundance of statutory paid annual leave -- in my albeit short professional career I have never come anywhere close to taking all of the time my employers afford me.

Around the first of this year, we snuck off to Chattanooga for a day trip. Before then, Atlanta. This past weekend we finally used our Southwest credit and went to Chicago. It is our second trip to the city, and this one was much the like the first. We landed at Midway, boarded to Orange Line and headed towards the hotel. This one included a subway ride, which we had not done on the prior trip and was my first such experience. We checked in early, dropped off our bags and went out to plot our next adventure.

There was something different about this trip. It was not only that it marked another chapter in the lives of this young couple in search of adventure on a rare excursion outside of Middle Tennessee. It was cold.

No, you do not understand. Really cold.

We had left Tennessee as the temperature was plummeting from the mid 50s to upper 30s. Our first venture out into the streets with our bags in tow was welcomed with 16 whole degrees sitting on the thermometer. Those degrees were laughing at us so hard that I swore a few of them fell off their perch and made it even colder as the wind picked up. I decided then and there that our trips outside would be few, and getting on a bus or train or tumbling into a storefront would always the goal. Mother nature and I weren't on speaking terms, mostly because I could not breathe long enough to curse at her.

Our first stop was to the Museum of Contemporary Art. Those of you who know me as the colorblind southern guy are likely not shocked that I walked around the building muttering "I don't get it" to myself and Samantha a lot. Still, it was much our like our previous trip to the Art Institute in 2009. I patiently walked around the exhibits, wondering about whatever the guy was on when dreamed this piece up. The difference is that many of them at MCA struck me as the kind of thing someone threw together right before their grant money ran out. Then again, an art critic I am not.

Into the cold again, we looked up at the bus sign and at our phones to figure out how to get to our next location. When I first saw the bus pull up, the number matched the one we needed, so we boarded. The driver looked at us and asked where we were trying to get to. I have to assume he did not ask everyone this question, but we looked mistake prone in this area arena of navigation. I told him, and he said that he had other stops before that route began and pointed to where the stop would be. I only partially understood him, only enough to know that I should get off the bus and walk over ... somewhere. I did so, and heard him honk the horn. I went back to the door, and he gestured for us to get on, instructing us not run our pass cards yet. Samantha had not heard the instruction, so he re-explained it. For the next few stops, I think he had to repeat himself at least twice each time to us. Hopeless travelers.

We finally got to the Museum of Science and Industry thanks to our abundantly patient bus driver. I stood in awe of the enormity of the exhibits. It was fun to walk around and see the live demonstrations of various physical science concepts and the amazement on the faces of the school children that were taking it all in. We did see a sizable contingent of Amish folks there, making me wonder a bit about how all that they saw fit in to their day to day. Walking out a bit more educated than when we arrived, after a morning of culture, we headed back towards the hotel.

We did a bit of shopping (that is apparently a major draw of Chicago -- who knew) where Samantha picked out her Valentine's Day gift (a watch). A wander in and out of the Apple Store was to be our final excursion out before dinner. We went to Giordano's for deep dish pizza because it was something we had omitted from our previous trip. I had thought it was rather crowded at 5:30 p.m. until I saw the crush of people that arrived around six. Apparently we were not alone in this notion of wanting pizza.

One last swing by the hotel and a walk for dessert capped off our trip. We slept in the next morning and took our time getting back to the airport via the trains and through security. We wandered around Midway for a while, with me playfully scowling at all the Chicago Blackhawks souvenir stores (at least it wasn't Detroit).

While waiting for our flight, a couple sat down across from us. The woman was leaning fully into the man's chest, sobbing. I did not try to figure out what was going on there, but they quietly boarded the departing flight for Boston. I tried to come up with all kinds of reasons why, but I stopped short. Whatever the worry, I hope they found a bit of peace at the other end of that flight.

We were then surrounded by some gymnastics team from Franklin who had just completed a meet in the city and were also on their way back to Nashville. You could tell that it had not gone well for them by the cattiness of the mothers towards the coaches and judges. The young girls seemed oblivious to all that, having had fun in spite of it all. My patience wore out quickly around them, so we went for a walk around the terminal.

Another group of bachelorettes were boarding ahead of us. The vapid conversations were difficult to tune out, but I caught enough of a look to see that it was going to be a long flight if we were sitting anywhere near them. Samantha agreed to find a seat that somehow avoided the fussing moms, the chatty bimbos and a woman who was boarding with her small dog. That somehow happened.

Our flight was delayed for 30 minutes, and we could not figure out why. The flight attendants had talked to the bimbos briefly, and retreated to the front of the plane. The gate operator also came aboard and talked to them, but then left. At this point, as far back as we were sitting, it became clear that something was not going well up in the front of the plane. At the half-hour delay mark, three Chicago Police officers boarded, and instructed the group off the plane. Much arguing and swearing later ("She's getting married!" "Ma'am, this is the airline's property and you are not welcome on it."), and a brief round of applause, we were in the air.

I have no idea where we are heading next, but it is always a good trip.