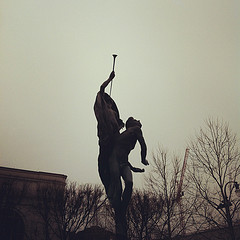 There is a familiar scent in Nashville on cold and rainy days in February around downtown Nashville. It is not particularly pleasant, the smell of hundreds of thousands of starlings leaving behind what birds often leave behind festering through the air. I strolled up to the Fifth Avenue entrance of the arena. Or at leas,t I would have had there not been a couple of thousand runners already lined up for that morning's 5K. I had been asked if I were running in it a few days prior and had gone to the trouble of signing up. However, this morning I was not in a particularly running mood. Sleep has not come easily, and even the walk from the stadium parking lot over the bridge to the arena had my shins throbbing. There would be no running this morning.

It is unseasonably warm, even with the damp weather of the past few days. I am sure at some point Mother Nature will make us pay for this "heat wave" with a string of subfreezing days. No matter, we earned them. I saw off one of my coworkers at the start of the race. I clumsily walked around the interior of the arena trying to find my race packet (nobody seemed to know what to do with late arrivals). I gave up and walked back outside. By this point, the wind was picking up and I decided it was best to go on home.

On the way back, I casually took pictures of various minutia of the walk back across the river. I began to meander mentally on some of the things that had transpired over the last few weeks. A verbal gaffe by a candidate for president was a frequent topic of discussion. As I began to mull that, a shopping cart appeared at the top of the pedestrian bridge with two shadows behind it. As I drew closer, a middle aged man and woman were pushing this cart and carrying on an inaudible conversation. They were smiling and laughing, but it was obvious to me that the cart in front them, "borrowed" from a nearby grocery store, contained their worldly possessions. Even though they did not have a lot, they did have each other's companionship. There is a good chance if you are reading this, you have a friend or spouse that you too can count on. They were crossing the bridge to get to where they needed to be, even if they were not quite sure where they were headed. I thought I saw a guitar in the front of the cart, so perhaps it was to busk on Second Avenue. I admired their spirit, for in this they were rich with love and laughter. I continued walking on past them and saw a bag plastic bag sitting on the bench. It had obviously been prepared by one of homeless outreach groups. All that remained in it were two sticks of deodorant and some tags that had been attached to clothes. I left it there, not sure if the owners would intend to come back for it.

The afternoon was spent retrieving and assembling furniture from IKEA. Our home decor has been upgraded several times over in the last year, replacing what had been barren walls and little storage space with several shelfs, pictures, rugs, tables and the like. As I say quite often, we are immensely blessed to not only have survived the worst of this recession, but to come out so much further ahead. But that is not the truth for everybody. I often catch myself whining about things a younger me or anyone in a less fortunate circumstance would rightfully despise me for. (I suppose you could add whining about whining to that list.)

Every evening in America, many families will skip dinner because there is nothing in the pantry to eat. They will do the same at breakfast and try to buy something inexpensive tomorrow for an early lunch. Some will gather around a newspaper or stack of forms trying to muster the ambition to fill out another application despite the rejection letters piling up. A penny saved there, a bill deferred here; they try to keep a roof over their head, food in their stomachs and love in their hearts. But damn, it will tough. Unemployment dropped again in January, but no economist will tell you that we are back on the path to prosperity in America. That time will still be what seems like a lifetime away. There are still millions of Americans that are either without work, or working in jobs that do not bridge the gap to help them pay even the most basic of needs. Some folks will tell you that there is a "safety net" for these people while simultaneously pushing more and more people into that net and complaining that we spent too much on too "nice" of a net.

If there is one thing that the last twelve years and two wars have taught us, it is that no man or woman, regardless of their background is immune to these challenges. To boil it down into class or race is simply to use bad data. Cancer can wreck the finances of any middle class American household. The job you have is far from the kind of stability we saw in the mid-to-late nineties. While I have the benefit of a two-income household, I sometimes stare at the ceiling above my bed at night wondering what would happen if friends or family lost jobs or if a member of their support network simply could not come through for them. Would I be able to help? For how long? I do not worry about things I cannot control, but I am also quick to lend a hand to a friend.

Tonight I went to a very festive house party to celebrate a dear friend's birthday. It was a gathering filled with warmth and friendship (even when team allegiances caused a humorous rift). I briefly thought back to that couple when the Chrysler ad was aired. Somewhere tonight, I am hopeful that the couple on the bridge are still smiling in the face of overwhelming odds and can catch the break they are looking for. I hopeful that we will stop relying on our so-called "nets" to help help them when a system is stacked strongly against the impoverished.