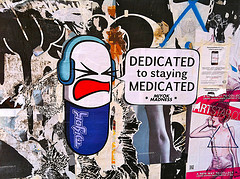 The sun has not come out from behind the gray clouds in a few days now. It is cold and wet with the afternoon commute a slow crawl through downtown. People's faces have already morphed from sunglasses and smiles into melancholy and annoyed glances. It is not even that cold yet, with the temperatures hovering in the 60s. But these folks have already prepped themselves for the winter months, with hands in their pockets, shoulders hunched forward and burying their heads as far down into their jackets as possible. Nobody wants to talk or be talked to. The typical southern warmth has evaporated into some other kind of behavior.

I sit at warm desks and couches for most of the day. Between trips for coffee and hot chocolate, I try my best to maintain a smile. There are doldrums for every season. Mine are usually in the summer, with hockey and the holidays curtailing most tendencies to slip into a funk. There is usually a 5K, festival or some other outdoor event in the fall and spring, while summers in the south are spent mostly indoors to avoid the swelter.

Things are a quite a bit different this fall. I am at a different job, different social scene, and even the home life has changed. I have far less work related stress, but there are still other kinds of pressure. I will simply say it is not a light load to bear. Every yearly reflection around this time is a bit better than the one before, but those qualifications shifted around a bit rather than universal improvement.

There are many things to be thankful for, though. Our hardships are really not at all that hard. We have managed to not piss off the majority of our friends to the point that our Christmas card list is still going to be a fairly good size (Hint: if you have moved in the last year or so, I probably do not have your new address). We bought a turkey for Thanksgiving mostly as an edible science experiment. The roof over our head does not leak, the heater works, and if either failed, we could just call the landlord. If I whine, karma should kick me in the gut on principle alone.