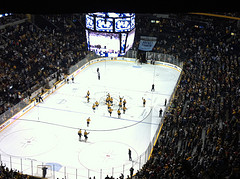 The Nashville Predators dropped their game tonight to the Montreal Canadiens in overtime. It means one point more in the standings, but the game had another significance. One thousand games played in what some have called [NHL Commissioner Gary] Bettman's Southern Folly. Those folks added another item to their arsenal of doubts when Atlanta lost its second franchise to a city north of the border this summer. To borrow something usually only uttered south of the Mason-Dixon line, "Bettman's Chickens" had finally come home to roost. Carolina, Dallas, Florida, Anaheim, Atlanta and Nashville all received NHL teams under his watch.

But how did this hockey club reach the millennium mark? It is in a smaller market, a smaller arena and has a very low payroll. Truth is, it required a bit of luck and several factors working in its favor.

The Nashville Predators have the benefit of playing home games in the heart of the city instead of a suburb. In addition to that, the district surrounding Bridgestone Arena is a vibrant entertainment destination rather than miles of parking lots and closed office buildings. Fans coming to and leaving the game have more options for food and entertainment than most downtown arenas. The arena itself is a cornerstone for many concert tours, so keeping the performing dates full with a team is mutually beneficial to the business district and to the management company.

It is particularly telling that the four award finalist last season (David Poile - General Manager of the Year, Barry Trotz - Jack Adams Trophy, Shea Weber - Norris Trophy, Pekka Rinne - Vezina Trophy) were either with the team on opening night in 1998 or were drafted into the organization. The first draft pick, David Legwand, still plays for the team. Big payrolls and "rental" players are not the hallmark of this hockey club. Instead, the team is committed to developing talent from their AHL and ECHL affiliates. It is very rare that a 19 year old stays with the big club in his first season, preferring instead to send them down to get in more practice and better familiarity with the system.

This one is harder to peg to a specific example. The organization's work in the community goes beyond the typical "we have to do this for good publicity." The causes are authentic, from Coach Barry Trotz's work with "Best Buddies" to frequent player visits to the Monroe Carell Jr. Children's Hospital at Vanderbilt University Medical Center and the standing ovations for honoring military servicemen and families, this team sees community as a partner and a privilege, not simply an obligation in their contract.

I will be the first to gripe about the cost of tickets. I have made a sport out of going to as many games as possible for a price lower than what the ticket representative wants me to pay. But a hockey game is an affordable entertainment option. A friend of mine went to Los Angeles to see a game and could not get into the arena for less than $99. The Predators are a quarter of that price even if you are paying full retail. The hockey experience is within most fan's budgets.

I have made several of my closest friends through hockey. In some ways, my wife buying tickets for a game in 2003 several weeks out while we we had just started dating marked a new stage in our budding relationship. If it were not for a series of hockey games in 2009, I would not have spent as much time around Alison, a friendship that lead me down the path to my current job. Codey, Paul and crew in Cellblock 303 have improved my hockey understanding immensely. These and others have helped make me a dedicated hockey fan. I believe this kind of network of fans has helped grow the organization to something that can replace a generational advantage that other franchises have.

Through Hell and Back

In the summer of 2007 was particularly difficult for the franchise. The Predators original owner Craig Leipold announced that he intended to sell the team to cover a reported $70 million loss on the team. His most likely suitor, Canadian businessman Jim Balsillie was riddled with suspicion that he had every intention of moving the team to Hamilton, Ontario. His public statements said that he would move the team, but evidence to the contrary began to mount with an agreement reached to go ahead and sell "Hamilton Predators" season tickets online. A "Save Our Team" rally was organized, bracelets sold, and business leaders went on the march. The agreement was terminated with Balsillie, a local investment group came forward and the team's immediate future was secured.

You do not get to 13 seasons in the National Hockey league through two recessions without a devoted fanbase, shrewd management and a little bit of luck. I cannot offer a prediction for how long they Predators will remain in Nashville. But the future is bright, and the clouds of uncertainty have already come and gone.

This team and this city has a date with Lord Stanley. And we as fans do not want to keep him waiting.