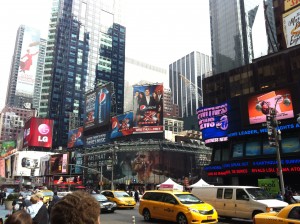 It is an interesting view from up here. It is a bit past midnight, and traffic is still fairly heavy on the road below. On the street corner, a pile of trash sits waiting for workers to come by and take it away. On the horizon, I can see the building my coworker and I will be at for five or six hours tomorrow. The Empire State Building looms large over it. In terms of a view, I do not think I could have asked for a better one in this hotel. The uneasiness of being here has worn off a bit.

"That was one of the tallest in town," I remember someone saying of the two-story Victorian-esque house that sat next door to a place I lived until I was about six. It was not all that big by most people's standards, but it was perched on top of a hill and that was what made it the "tallest" building -- what he really meant to say was that it was the highest vantage point you could have in the rurual town of 2,000. From there, you would see the buildings down on Front Street (which were 2-3 stories) and the neighborhoods that rarely had a two-story building.

My trip to Manhattan is one I have really looked forward to. Not only have I never been to New York City, but it is also the first of two business trips on the schedule for this year. "Travel" is rarely a component involved in the jobs that I have held, so getting to do this to some pretty cool locales is exciting. I am sure that I cannot count on it to continue much in 2012 (let's just call both fact-finding missions), so I'm savoring it as much as possible for now.

My coworker is not really a fan of Manhattan, using the anecdote that an experiment with lab rats was performed with the same population density, resulting in cannibalism despite having other food sources. In his words, "it's just evil." Meanwhile, I'm just remembering scenes from Ghostbusters. It is actually a beautiful city so long as you are looking up. It is beautiful in other directions too, but in their own way. Everything looks well-worn and few streets or storefronts in our area are as sleek and sophisticated as I expected. But the city is a machine. You can find beauty under the hood of car where others might just see dust and the occasional oil leak.

I am only here until about 5 p.m. tomorrow, so I hardly have the "full" New York City experience. Other than getting over from LaGuardia, we have not ventured out of Manhattan or to its northern or southern extremes. I hope to get back some time.