Back to normal nine years later 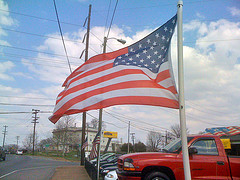 The news of the day passed by most of us without any fanfare or trepidation. The President announced that all combat troops will be out Iraq by the end of the year, "home for the holidays," was in his careful choice of words. Nearly nine years ago, another President sat in the Oval Office and announced the beginning of airstrikes and an impending ground invasion into Iraq. He delivered what would be one of the defining speeches of his presidency, for better or worse. We met, for the first time in a long time, War.

Only in the literal sense, though. You could argue that a good portion of the American people were figuratively drunk on the concept of defeating a ruthless dictator whose motives were not understood, but was said to pose a clear and present danger to our nation. I was drinking more in a "Rome is burning, or maybe it's just a grassfire; I don't really know" kind of sense. I did not really comprehend what exactly War meant other than cruise missiles being launched from the deck of a destroyer to kill whatever bad guys that were out there. War was a term reserved for black and white documentaries on World War II. Growing up in conservative West Tennessee meant that I did not see much about Vietnam even though that part of the state gave up quite a few of her sons to the cause. My paternal grandfather earned a Purple Heart in Korea with a fair amount of shrapnel still in his body when he died in 1999. That was War -- a fictitious, GI Joe-versus-Cobra kind of conflict.

I was midway through college and colorblind. War had a long time before she would ever come calling for me. I got to be a self-centered, big-idea'd and somewhat reckless college student. It was a right and a time that I took for granted in so many ways.

But what I did care about at the time was the news around campus, and War was the news. The narrative goes that I was assigned to cover an antiwar gathering in the gameroom of the university center, and I instead went drinking. My future wife was the organizer of the event, so this would have likely been our first meeting. The narrative is not totally the truth. The event itself was supposed to be covered by somebody else on staff that year, but I was called to see if I would go. I had another social commitment (which happened to involve alcohol) that I wanted to go to instead. So I went to that, and the story event did not have an assigned reporter at it. No journalism awards for us that year.

I took over the newspaper the following fall in what was a bit of an unexpected turn of events. I knew I had the job in April, but final notice was not shared with the rest of the staff until late in the summer. I went on to summer camp for my final year as a camp counselor. Funny, but I now realize that the older campers I had very well could have fought in the tail-end of this war or one of our other conflicts. I returned to Martin to meet the Publications Board-approved staff. It was a fair split of conservatives, liberals, greeks, non-greeks, good writers and some folks who probably should have considered changing majors. In the second semester of that year, I wrote a retrospective on the war in Iraq. Again, a year after it started was not the best lens to use, but it still gave a student perspective on the most contentious topic of a generation.

So here we are. Most news stories you will read over the coming months will point to the scoreboard of statistics related to the War. That is the only way we can actually wrap our minds around what exactly the last nine years were all about. But for me, it is more of a disconnect from what is "normal" and what is War.

Normal is going to church on Sunday. War is your voice cracking when you ask for prayers for a fallen fraternity brother who left a wife and young child at home. Normal is cooking dinner. War is the story of a man who nearly choked his wife to death because she startled him in the kitchen before he "snapped out of it." Normal is updating Facebook for your friends to read. War is posting promises to come home soon, but with no guarantees. Normal is going to a small town and watching a parade. War is watching a procession of motorcycles escort the hearse to protect the grieving family from senseless protests. Normal is laughing and joking at a company meeting. War is a veteran searching through the classifieds for a job because her GI benefits ran out, and she does not have a degree to come home with. Normal is reminiscing about a family vacation. War is your mind never leaving a place of horror even years after the rest of you already has.

I hope this is what the President is talking about when he says that the War is over.