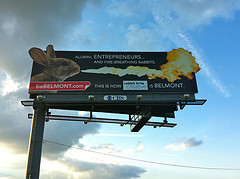 Private schools spend a lot on advertising. Some of it is rather disturbing.

The Tennessean ran a story this morning on the necessity (or lack thereof) of the traditional four-year degree. It comes on the heels of a generation realizing that good paying jobs do not often correlate to the expense of higher education, and some professional jobs (such as web development and design) place a higher value on experience than on education. I understand these revelations, and there is a certain merit to those that claim that the bachelor's degree is no longer an instant ticket to success in the professional world.

Here is the truth. College is expensive, and not for everyone. No matter what your guidance counselor told you in high school, it should not be your penultimate aspiration to graduate from college. To put it simply, you should do something that combines what you love and the salary to support your way of life. If you can meet those two criteria, then it really does not matter how you got there. But I disagree that the four year degree is "worthless." It is also quite telling that only around 16 percent of Tennesseans have at least a bachelor's degree, putting us among the lowest percentages in the country. Higher education is simply not a priority for many Tennesseans and it will take a renaissance of sorts to change that.

A college degree proves something. It serves as a testament that you completed a long-term project against any odds and received as a token of that accomplishment a diploma. It represents that you were diligent in your studies, and that in the course of that you became a better citizen within society. To discount the collegiate experience as "worthless" really does not do it justice. It just means that an individual who does not take that route has to prove themselves through other means and with a currency not as readily accepted everywhere. But it is possible to have a very successful career without a college degree. In choosing that route, the bar will be set even higher for you. And for those willing to take that chance, I salute you.

It was not what I chose. In 1999, I had enough of a grasp on what I wanted to do that I could have opted to forgo college and just work as an entry-level software developer. I would have likely made more money on the front-end, but I would have also been putting all of my proverbial chips with my employer at the time. Career development, personal growth and financial gain would have been contingent on how well I performed at that particular job. Too many missteps, or the kind of crisis of faith that typically plague young minds would have spelled disaster for me. What if I got burned-out on software development too soon? What if my employer pigeonholed me into one kind of work and I did not actually diversify my skill-set? Would I be enough of a standout rock-star to just go work for someone else if things started to head south?

I could not answer any of those questions. So I decided to attend an inexpensive state school in rural West Tennessee. And it was the best decision I have ever made.

Here is why. I served in student government as a freshman, joined a fraternity as a sophomore and ran an award-winning student newspaper for the remaining time that I was at the University of Tennessee at Martin. These and other experiences had nothing to do with my career path, but it gave a perspective that I would never have gained otherwise. Today, I do exactly the kind of work that I could have started doing after graduating high school. Possibly for even less pay than I would be if I had focused only on becoming a better web developer. But what I did in the four and half years that I spent at UT Martin shaped me as an individual, not just in my occupation. I learned about leadership, tackling classes that I did not necessarily care much for, interpersonal challenges, social mores, and effective communication along with many other life lessons that take longer (and come with greater consequence) to learn in the professional world alone.

I am a greater asset to my employer because of my college degree and what it represents than I would be without it. I would not trade it for anything. My advice to young entrepreneurs and others who decide that they want to forgo college is simple. Going to college is not for everyone, but neither is skipping out on it. You had best have a strong personal commitment to growth and perseverance. It would be an arrogant mistake to think that you can simply "wing it" in the professional world if you lack those qualities.

For those of you in the technology field who feel that a college degree is not worth your time, remember that forces of competition will only become greater as new folks enter the industry. Your rock star status will not shine forever. It is best to be good at many things than than to stake your future on just one. You did not pick the easiest route, so best keep running as fast as possible.