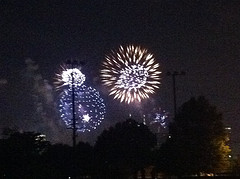 Summer is ending. Sure, it's August 8 and there is still a bit of warm weather ahead of us, but the daylight will begin to wane and a chill will come when we least expect it. Today, the stock markets bled more than three trillion dollars as fear and uncertainty again ripped through the psyche of the American investor. Short-sightedness tends to get the better of us, with instant gains evaporating and political scores that will take much longer to settle than calculated. A few have likened this time of economic depression -- if not the technical term, certainly the psychological one -- as being on the receiving end of a siege from an approaching army. Hope has run dry for many Americans, as unemployment benefits run out, and state coffers run dry. There is not exactly much sign that hope actually exists for many. Cynicism has taken over, and a frantic clinging to misplaced worry has lead to a series of rash decisions on the part of our nation's leaders. We had thought this time of hardship was over. We had thought that better days were all but assured. The worst simply must be behind us.

We were wrong. But we are still right.

A few years ago, an industry official at a former employer declared that the business association he lead had decided not to participate in the recession. As if he could simply opt out of it on some form. His speech, which I only read second-hand, pointed to the signs of growth in certain sectors, and that those better days that his association members were yearning for were just around the corner. The trick, he said, it that it would be up to them to create those better days. Some did, others shuttered within the year. Lofty words can inspire our hearts, but our hands may still struggle.

Credit is hard to get, and will only get harder. Debt, while carrying such a negative connotation in today's vocabulary, is an essential instrument to create wealth. It seems to make little sense on the surface, but it also has practical implications. If you run a delivery business, there is a good chance you will need a truck. You might be able to buy the first truck with cash. As business grows and you need a second truck to meet the demand. The smart businessman figures out how much he needs to make in order to pay for the new truck, evaluates the risk to do so, and then, being confident that the risk is managable, pulls the trigger on buying the truck on a line of credit that he pays back over time. He doesn't buy five trucks when he only needs one. Today, he can't buy that one truck even if he's bought dozens of them in the past and paid for every last one of them. He probably wants out of the delivery business. Credit is too hard to come buy, and it has been for years. That same industry leader probably sits and thinks to himself about how he was dragged along for this recession, despite his insistence that he wasn't participating. That is, if he is still even employed himself.

As sexy of an analogy as it is to continue putting the United States government around a family kitchen table balancing its checkbook, we need to be a bit more innovative and stop selling Uncle Sam short. He has the ability to not only reduce his debt (a smart move), but to also increase his wages. And he does not have to do that at the expense of the middle class or low-income households. So while "Debt Free" zealots scream for the US to cut up its proverbial credit card (you know, the one we use to build roads, defend our country and our educate our children), we need to start thinking about making Uncle Sam take on more than that part-time job he has collecting taxes from everyone but the top two percent. And put him to work building a better country.

Some have called for a Second Works Progress Administration, a plan put in motion that gave jobs to the unemployed in the years following the Great Depression. These workers built schools, bridges, roads and the like for roughly eight years. World War II eliminated the need for the WPA, but it was perfectly acceptable for it to be decommissioned when the need was no longer there. As the economy heads for what seems to be an inevitable double-dip, it may be time to evaluate this idea. There are many critics that say the WPA and other New Deal programs prolonged the economic strife of a nation. A larger percentage believe that we might very well still be suffering if it had been for the government taking the lead and experimenting with ideas like the WPA. And that may be the most prevalent problem in this current time: a lack of desire to experiment. We are too afraid to have the occasional bad idea in a string of good ones.

Some folks say we should just let the market correct itself, and that our trust should be that this correction will lead us back to prosperity. As if the market's invisible hand were some idol that we must all pray to for relief. The trouble is that those folks tend to be the same ones who make the most money when the market is left to its own devices. And the wealth of the few is yet to translate to the relief of the suffering many. We need to balance our desires to put everyone back to work with the understanding that while many Americans will swallow their pride and go to work at Starbucks after being an investment banker for 20 years, that is not the solution. We forfeit the intelligence and experience of those workers so that they may learn the difference between "Venti" and "Grande." Transitioning the skills of workers where jobs may never fully recover (manufacturing) into areas of growth (new energy) is critical, and not some sort of handout or welfare as some call it. Understanding that we cannot simply stop paying for medication for our seniors or sending them the Social Security check they use to pay for groceries is also important. We cannot cut benefits to soldiers returning home when they are the most vulnerable among us after giving their lives and sound minds so that we may squabble in the halls of congress on just how much PTSD treatment should cost.

Guess what: We may have to swipe the country's credit card a few times to do it. And that is okay. Because I believe in a country that is bold and is willing to take the smart risks.