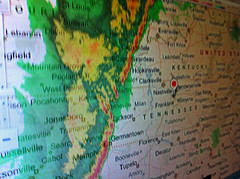 A few days ago, I was a few feet from this spot more than slightly concerned about the future. More specifically, I was sitting up in bed, listening to the sound of hail and branches hitting the exterior window as the storm raged at 4 a.m. I made my way into the bathroom (our single bedroom apartment lacks the amenities of a walk-in closet or basement) to stand for a few minutes while thing calmed back down. I am not one that is particularly scared of storms, but Mother Nature has been particularly cruel lately with floods and tornadoes. The weather radio sounds every few minutes most nights in most parts of Tennessee. The water slams against the building for a solid 20 minutes or so, and then things are back to normal. If fear ever comes into the equation, it is because things are really out of the ordinary. That particular storm knocked out power to a large portion of East Nashville and toppled trees and large branches over most of the neighborhood. Another storm is raging outside tonight, but it sounds more like the "normal" variety.

I got a look at the damage on my morning commute. I was stuck behind a NES truck with a massive post-hole digger on the back and drove underneath the outstretched boom of another where a technician was feverishly working to restore power to about 27,000 customers who were without it. There were still a little under 3,000 without electricity this afternoon. Of course, as I write this, that number just jumped back up north of 15,000. It has been a rough week for those guys.

The storms have sapped what energy I might have had to write the political commentary that I have been mulling over for the last week or two. There certainly has not been a shortage of things to talk about. From stripping the collective bargaining rights for teachers to banning a certain word from the classroom, state legislators have adopted wholesale the attitude that this session is the one to settle decades-old political scores while doing little to move our state forward. We made headlines for the "Don't Say Gay" bill and other proposals to require parental notification before a student could join a group at school -- thinly masked as a way to curtail activity that the Republican-dominated legislature does not approve of. While it is difficult to take much comfort in it, I will try to remind myself that some of these bills are not even written by Tennesseans -- in some cases, not even read by the sponsor. Conservative think-tanks are cranking out ridiculous proposals nationwide as a means of moving the needle more right of center.

The weather has finally calmed down and the radio talks about counties to the east. Just waiting for the next front.