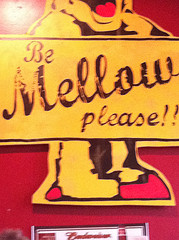 From my vantage point, they were just daisies. Three, small yellow flowers waving this way and that. A small hand was holding them, but I couldn't make out more than that through the back of the truck window. The driver appeared to be a woman, presumably the young child's mother, on their way through East Nashville. I was driving home, so staring at the back of cars was not an uncommon occurrence. But I thought about the daisies, and the happy child holding them. All of this driving down the road, peering into the back of a pickup truck from my spot on the afternoon commute.

I had bought silk flowers for my grandmother a month or two before she died of cancer (those were also daisies). I took a picture of them sitting in the passenger's seat of my wife's car. I had swapped vehicles with her at her work that afternoon that I was going to visit my grandmother for what would be the last time. Seasons have changed, floods of emotions and of actual water have come and gone. My own recent transition has me working as hard as I can, but enjoying it immensely. It almost has been enough to forget that the hockey season came to an abrupt end. Other things in our lives also came to an abrupt end, perhaps for the better. Friday came and went, and we started another chapter of lives.

I was fascinated by the flowers. I had contemplated getting some for Samantha, but even she admitted that would have been a bad idea as we try to juggle household budgets. The truth is that we are very fortunate in so many ways. Kind friends, fairly good circumstances and unlimited potential. Overcast skies dominate the horizon, but soon enough they will give way to sweltering heat. But at least it will be sunny -- except for the days it is not. The flowers do not particularly care one way or the other. They will bud, grow tall and then be plucked up by a little girl to make her ride home that much more enjoyable.

We are eating at home a lot now, thanks in part to our first participation in a CSA. There have been vegetables that I have never heard of coming into our home on a weekly basis. Thankfully, none of it has been squash -- yet. I can't stand the stuff. Strawberries, onions, lettuce, spinach and others have forced us to get creative with how we can use them. And, by we, I mean Samantha. I still have not taken to cooking, preferring instead to be cuddled up with a laptop with one of the remaining hockey games on. I try to keep up with the dishes, but eating more at home means that is more of a challenge.

I am looking forward to this summer more than in recent memory. We will have friends living closer than in previous years, so perhaps I can avoid the typical malaise I slip into at the end of June. I partly blame it on being conditioned since childhood to be bored over the summer, and partly on my indifference towards baseball. I need to get back in the habit of running on the weekends since another friend of mine pointed out that my 5K times were more "brisk walk" than "run." I gently reminded him that he doesn't run unless somebody is chasing him or its half-price beer nights at Buffalo Wild Wings. He wasn't amused, but I sure as hell was.

Lots to do. Not enough sleep to do it.