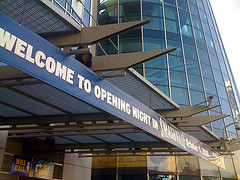 Don't call this an obituary.

Obituaries are for bringing closure to something that has gone quietly into the night, never to be heard from again. I do not feel that way about this season. Yes, it is over. The NHL is not going to give us another game to try and even up the series. Not even another sixty seconds of 5-on-5 play to hope for one more lucky bounce past the President's Trophy winners. Heroics were aplenty, but the team could only call upon an unlikely victory so many times in a series. But nothing is dead here.

There won't be a Stanley Cup hoisted in June down lower Broadway. Hockey fans in Nashville will have to wait a bit longer before they see the young faces of unlikely heroes take a bath in $3.00 champagne or pick confetti out of their beards for a week. But this season, the Nashville Predators were closer than they ever have been. And I have to believe that they will get even closer to making that a reality.

Something is different this year. It is not just that we got out of the Western Conference Quarter Finals. That is actually not all that surprising. What is surprising is that I was not walking around two-thirds full buildings in early November. It is surprising that the team set a franchise records at 22 sell-outs, and that I got to know a much more excited fan base. The team's regular season record did not warrant that kind of excitement (there were times when I was convinced that sneaking into the playoffs would require a herculean effort to attain), but they still filled the building 16 times on a 41-game home slate. This in a region dominated by college and professional football every fall.

Games were fun. Players were skilled, if not always playing their best. This year, the franchise grew up. There are plenty of holes to fill for next year, and some holes to make by jettisoning some of the "passengers" that the coach started getting into the habit of calling out on a regular basis there towards the end of the season. This was not the best team that could have taken to the ice (most of those guys spent extended stays on IR). But it was the most exciting season of hockey that the Music City has ever seen.

The regular season begins in 152 days. I am eager to see what comes next. And that is why this is not an obituary.