Too many places I've got to see 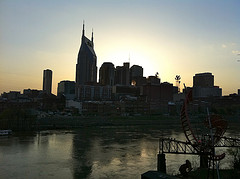 Writing is often an exercise to either fill time or to empty your head of thoughts. I tend to go with the former excuse, as most of my thoughts are neither worth repeating or coherent enough to warrant taking the time to put them down. So here is an exercise in filling time. I do not really have much of it to fill, though. I really should be getting ready for a lunch meet-up to hand off gifts to my youngest family member. He's two, so I doubt he will care if I am wearing a t-shirt, jeans and sandals. Which is probably why I am sitting here instead of taking the time to look more presentable. I'm exhausted.

In the immediate past, there was a 4-3 overtime win for the Predators to take their first match-point of a playoff series. A win Sunday afternoon and they'll advance to likely face either Vancouver or Detroit. The 12 seasons of Predators Hockey have been mired with the "oh so close, better luck next time" situations so often that I can hardly get my hopes too far up. But watching them score with under 40 seconds remaining in the third period to tie the game and then on a wild overtime goal, I have to believe that it is well within the realm of possibility. Samantha and I got $10 tickets to the pivotal Game 6. And by all measures, it will indeed be pivotal -- both for the postseason and for the franchise's energized fan-base.

Looking a little bit further back, I came to quite a bigger crossroads. I released a few open source code snippets this week. That in and of itself is a footnote. They aren't even particular clever or useful to the majority of web developers. But what it does represent is a first step in getting back into the habit of web development. I certainly get be around a lot of it at Centresource (through planning a solution and managing a project through to completion), but I rarely get the opportunity to do it. Most guys tinker with cars or home improvement, some cook elegant meals for the wives and family. I don't do any of those things -- much to the chagrin of Samantha. Instead, I sit down at this computer with an open text window to either write a post like this one, or download some PHP library and poke around with it. It never amounts to anything more than a learning experience. I've got the basics of Ruby on Rails down, but have never launched a project with it. I can pull in data from Twitter, Foursquare, Google Analytics and a host of other services, but other than a few minor tweaks to some of my freelance work, it does not get put to a whole lot of use. I really enjoy web development, but I'm not a developer. At least, not as my primary source of income.

I have had the pleasure of working with the team at Centresource since late August of 2009 as a strategic consultant, later promoted to manager of strategy. I cannot express enough gratitude to Nicholas, Evan, Chip and Chris for the opportunity work for one of the best interactive agencies in the southeast -- that superlative is not lightly given, and I along with many of our accounts really believe it. That group has a bright future ahead as more businesses invest in web and mobile development in the coming years. My time with the company is drawing to a close this coming Friday. I will be joining the development staff of Raven Tools here in Nashville the following week. The last several weeks have been spent transitioning accounts and responsibilities.

My wife has been phenomenal through this whole process and I would be lost without her. Okay, so perhaps not physically lost -- I manage to do that when she's around, too. We both need a vacation to unwind soon after all the dust settles.