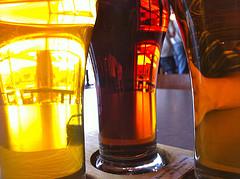 The case of water was not fulfilling its duty to hold the paper down, but I suppose that's what happens when you expect an inanimate object to perform a function for which it was not engineered to do. Only a handful of volunteers had arrived, and I as the dutiful husband of the project coordinator had very few responsibilities other than to ensure that the water made it to the site, and that the paperwork did not blow away in the wind. There we were, spending a Saturday morning in the Bells Bend community to plant trees on metro land.

A few hours prior, I had wrapped up a 5K in Centennial Park. It was actually the third time I'd run that particular race, but my time of around 44 minutes was not an improvement and ranked dead li. Sickness has taken me down a peg or two lately with a cough I cannot quite kick. It always seems to happen this way around the time the seasons change. An upper-30s day in March also is not the best weather to run in, although I have certainly run in worse.

The tree planting was good, with around 700 total trees planted by the group of around 20 or so volunteers. Planting these particular trees was not particularly challenging -- dig a hole about as deep as the blad of the shovel, stick twig in the hole, fill dirt around it. The trees were not particularly delicate, so how one planted them was not of great importance. The organizer predicted about 80 percent of the trees planted that day would survive to maturity, depending on how severe the summer drought ended up being. In Nashville, we are growing accustomed to three seasons: blizzard, flood, tornados and hell (attribution needed). We'd love to tell you that there is a season with comfortable weather and no natural disasters, but that would just be lying.

April is actually supposed to be one of those seasons (except for the occasional tornado). I am looking forward to the two 5Ks we have scheduled in the next month, hopefully a long playoff run by my hockey team. It's funny that they are still in the race right now after falling out of fourth place down to as low as 10th in the conference. This led to many, including myself, to count them completely out of contention. It seems to be a theme for the year: what is going on right now is not necessarily an indication of what happens next. A lot like Tennessee weather.