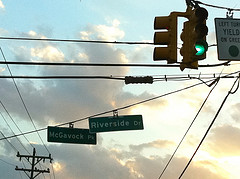 There was not much of an opportunity to get the picture, but I wanted to take it anyway. The signs, the clouds and everything else made for an interesting shot. Granted, I was behind the wheel of a vehicle at a stoplight, and the subject was right in front of my windshield. I craned my neck while staring at the viewfinder. The light turned green, I pushed the icon on the phone screen to snap the photo. Hardly as satisfying to hear a shutter noise versus hearing an actual shutter. It did not matter. It was time to drive before the car from Williamson County lost its patience with me.

I do not know why I bother with my mobile phone as a camera, anyway. It takes dark, grainy and out of focus pictures. At the same time, the camera on my iPhone is better than most digital cameras that I have ever owned. In the last year, I have taken nearly 700 photos. Most of them serve the simple purpose of recording a moment in time rather than trying to be a keepsake picture with proper lighting and good framing. I just do not pay attention to such things. All I want is the photo. Every few days, I dump them off my phone and into iPhoto, try to adjust a few so they are not nearly as embarrassing, delete the un-salvageable and then post them to Flickr. I can usually expect about 20 people to see them, thanks to the stats that show up next to each photo.

I started Project 365 in January mostly because I was already taking a lot of photos. The mental reminder now often comes at odd hours to make sure I got a photo. Today's came while waiting in the drive-thru at Starbucks, so I just snapped a photo of my waiting. Like most endeavors, I probably will not see the value in doing this until after it is over. Quite a few of my friends have undertaken the project and either finished it or gave up. So, being the perpetual conformist, I figure I merely joined the growing throngs.