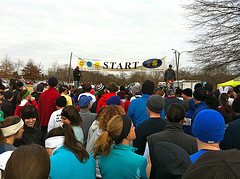 It was far an away the most "exotic" course I have ever run on, but the Zoo Run Run has made it into one my favorite Nashville 5Ks. I also managed to set a personal record (by only a few seconds) at 0:40:34. My goal is still to get closer to the 30 minute mark some time before the end of the year, but it will take a lot more effort than I put into running last year. There are still long stretches where I could be running that I just walk. It is probably more of a psychological barrier than a physical one, although I still felt pretty wiped at the end of the course. I only noticed a few of the animals out in their exhibits, but it was really too cold for either the animals or I to be out there. They just have the luxury going inside. My destination was a few miles further down the way.

I suppose another note that I should mention is the rather lousy head cold I have been trying to fight off for about two weeks now. It kept me out of work the Monday before last, and just when I thought I was feeling better, body aches returned late last night. Perhaps I could have trimmed a minute or so off my time if my body did not hate me so much for what I was putting through while sick. Hoping DayQuil/NyQuil doses over the next few days will chase this off until spring starts.

Okay, even I am not that optimistic.

January has been a challenging month, both personally and professionally. I will spare the specifics, but so far I have managed to keep an upbeat attitude. I work with and hang out with some pretty awesome folks, so we will get through everything one way or another. Samantha and I signed a lease renewal on our current place, which serves as a reminder of just how good we really have it. My love affair with East Nashville is yet to lose its luster even as we keep looking ahead.

Now for a quick explanation. The title of the post refers to a series of epic tantrums that a much younger version of myself would throw when visiting a zoo during the summer, particularly when the penguin exhibit would be closed. A several hour car ride to a penguin-less zoo would put this version of myself over the edge. I cannot help but be a bit bummed that they are yet to have an exhibit at the Nashville Zoo featuring penguins. Maybe they will come in a future round of expansion.