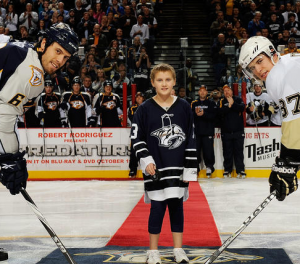 "Excuse me." "Hey, kiddo! How are you?" I turned around to see a short-haired little girl walking up from the lower bowl seats. She was all smiles, being the guest of honor for the evening. About an hour earlier, she had dropped the puck to start the game and rang in the team from the intermission by way of an air raid siren. I have to think she was on cloud nine to get to be introduced in front of a sell-out crowd before the hockey game.

We weren't even supposed to be there -- our seats were way up in the rafters next to a group of Pittsburgh fans that were just passing through the town. One even asked me how many quarters there were in hockey. I tried to pour on the best southern gentleman charm I could to answer their question. Tons of Penguins fans, and they were getting a quite a show. We had just snuck down to visit some folks sitting in the lower bowl, so our chance meeting with the girl was totally unscripted.

The thing to know about this young lady was that she was the child ambassador for Hockey Fights Cancer Night. As a hockey fan, she was having the time of her life -- what other nine year old gets to stand out at center ice with Shea Weber and Sidney Crosby? Brandi Burton had life-threatening cancer, but for those three hours on an October evening, she was the Mayor of Smashville.

Tonight's game was supposed to be the one I didn't attend, but our friend Alison was able to find some really good seats available from one her friends on Twitter. I got a text message around 5:30 this evening asking if I wanted to go. As rule, I rarely turn down free food or free hockey tickets. The walk across the river from my car was brutal with the wind and near-freezing temperatures, but totally worth it. Maybe the boys could finally get off the slide.

Our seats were behind the visiting team bench, up a few rows. We could see everything up close, but nothing along the boards. It is so much louder down in the lower bowl, particularly during player introductions. Paul McCann, the public address announcer's voice cracked. I at first thought he just needed to clear his throat. That was until an image popped up on the megatron. I only needed a moment to figure out what was about to be announced. My heart sank.

"Please join the Nashville Predators in a moment of silence to honor Brandi Burton, the team's Child Ambassador for Hockey Fights Cancer." Brandi had lost her battle this past Sunday. The tears in the corner of my eyes were instant and required a herculean effort to hold back. It hurt.

A report in 2007 showed that about 10,400 children under age 15 were diagnosed with cancer. Survival rates at the time mean that roughly 1,545 children would die from the disease within five years. For a short hockey fan, life ended much too soon. I wanted to rationalize it away, thinking that illnesses in developing countries take a far greater number of children each year. But there she was, a reminder that a life once vibrant was also fragile. Brandi could have been anyone's daughter.

The game went on, with the Predators grabbing a 2-0 win over Phoenix. A win is usually enough to cure just about any worries or troubles I have. Not tonight. My heart goes out to the Burton family for their loss, and a prayer goes up that humanity will find a way to cure this disease.