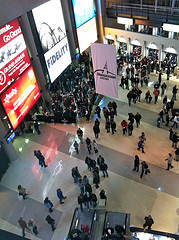 I dropped my head in frustration as the goal was announced and the PA announcer thanked everyone for attending. I pivoted on my heels to make our way for the stair. It was becoming a bit of a familiar feeling -- the shuffling from the seats at Bridgestone Arena after the hockey club failed to convert on the shootout or gave up a soft goal in overtime. Instant but hardly painless, a dagger is driven into the heart of ye old sports fan. Expletives are muttered and you can't get out of the arena fast enough. This feeling of angst and anticipating coming up short after showing signs of promise is particularly bitter.

(Note: If you have little interest in hockey, it is safe to stop reading here. You will not miss much.)

For the last half of the previous season and all but one home game for this campaign, my partner in hockey crime usually takes on the responsibility for uttering the expletives. Alison claims to be used to it as a fan of the Houston Astros, but I am pretty sure my wife thinks we're both gluttons for punishment. I walk through the door, take off the jersey, talk briefly about her quiet evening at home and then retreat to my computer. I usually whine about the game somewhere on the Internet. Obviously tonight is no exception.

The funny thing about it as a sports fan is that you are utterly powerless in shaping what the home team does on the ice. I pay for the tickets so the GM can acquire talent. I occasionally buy stuff from the pro shop and concession stands. As a fan, that is considered holding up your end of the bargain. I and the 17,112 folks that comprised tonight's sellout crowd did everything they could be asked to do. The team on the ice did not hold up their end of the bargain.

Through two months of hockey, the building has already tied last year's sellout count at four. In a piece in the City Paper, the new CEO says that he does not believe in the win-to-sell-tickets or sell-tickets-to-win approach -- he attacks both. But while tickets are selling faster than they have since the second season in 1999-2000, it cannot be ignored that the team is sitting three spots out of dead-last in the conference. Sure, the Western Conference is insanely competitive (they are only 7 points out of first place as of this writing), but winning games early in the season is crucial for post-season seeding in March and April. Losing the close ones now either has you squaring off with the best in the league, or worse -- on the outside looking in when the playoffs begin.

I do not have a solution for what ails the team, and I do not put a lot of stock in the pundits that claim to possess it. The solution is in that locker-room. Perhaps it is at the other end of the phone the GM picks up to bring a player up from Milwaukee. Perhaps that call is to another team that is ready to sign up for a trade. I will not even discount if means a call for changes in the coaching staff, though that one never appealed has appealed to me during a season. All I really want as a paying fan is to watch them win.

I did not make it to the Chicago game earlier in the month, so my last six home games have ended in losses, five of those were in extra time. The two early season wins are a really faint memory at this point. Sure, I would take a strong road campaign even if it meant mediocre success at home, but the team is 6-7 in that category.

Barring free tickets from somewhere, I do not plan on attending the Tuesday home game. It is not so much of a "protest" move as it is a necessary break from the frustration. I am not a fair-weather fan, but I also know when it is time to get out of the middle of the driving rain for a while for ones own sanity. We will see how December goes.