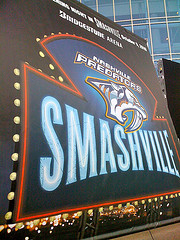 This Saturday was by far one of busiest this year, featuring a 5K, two festivals and a hockey game. I ran the 5K in my second fastest time of the year through Germantown. The Germantown Street Festival 5K Bier Run was a good race with a rather odd route through the middle of the Nashville Farmers Market, but the weather was great for it. I think if I could actually limit (or eliminate) the amount of time I spend walking during the race, I could have much better race times (this one was still 42:10). I just need to find that extra motivation, and a way to keep myself from getting short of breath. The first mile or so was wrapped up in around 10 minutes, so I know it can be done. I do not think there is another 5K on my schedule for the remainder of 2010, so I will try to figure it out on the weekends this winter. As always, I got a t-shirt for running. My drawer for t-shirts is starting to hit capacity.

Samantha joined me as we briefly went back to the festival, as it takes place just a street over from my workplace. Parking was less of a hassle than most people dealt with, but there were a lot of vehicles in our lot that did not belong to employees. The crowds were rather ridiculous, so we picked up a coffee and went back home. The remainder of the afternoon was spent at home, before heading downtown to the Southern Festival of Books. If you know much about me, you can guess how long I stuck around for that one. I instead went to the plaza in front of the Bridgestone Arena for the Opening Night festivities for the Nashville Predators. Not being nor having a kid, there was not a lot going on for me other than player introductions down a a red carpet, so I picked up a few drinks from two different bars on Broadway (I had a few hours to kill, after all). I met up with Alison who had our tickets, and we went on in. Everyone got a free long-sleeve shirt at the door.

I have a few observations from the game. First off, the Anaheim Ducks are bad. Really bad. The 4-1 final score only tells half of the story, but I am not sure it speaks as positively about the Predators as much as it indicates about the Ducks. Other than that, the atmosphere in the building was something I have grown accustomed to when attending sold out games. And kudos to the club for ensuring that opening night was at full capacity. I hope to go to quite a few more games this year, given my close proximity to head over after work for weeknight games, and the budget-saving option of grabbing the $10 tickets from the box office on games with less demand. I recently created a profile on ESPN Passport, and it had some interesting stats for me.

Interesting stuff. I have no idea what games I went to before I started keeping up with them on Google Calendar or taking pictures with Flickr. I have been on hand for quite a few losses to the Red Wings, and I remember a thrilling OT win against the Kings back before the lock-out. I'm hopeful for a good season, and a deep playoff run.