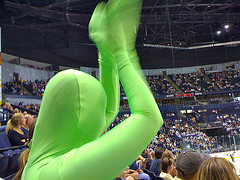 With 95 degree temperatures persisting through the first day of fall, it certainly does not feel like we are nearing the end of September. I was actually sweating a bit in my hockey jersey before the preseason game last Thursday, a feat I do not recall pulling off since college when it was the only clean over-shirt in my closet (I am was terrible about keeping up with laundry). I have actually been thinking a lot of my time at UT Martin lately, with a handful of friends on the brink of making pretty big life changes (on top of the ones they already have) later this year. I was hanging out with a friend from the fraternity last week and talked a bit about how things have and have not changed. I do not get back to campus but once or twice a year (it might not even happen this year at all), but I still think fondly of it.

I have a fairly busy fall on tap, and it could have been much busier. I came really close to pulling the trigger for season tickets to the Predators (I am frequently asked -- no, I have never been a season ticket holder), but scheduling and timing of finances was just enough to walk away from it for now. The plan is still to go pick up the $10 day-of promotion at the box office when we want to go to games. Next month is BarCamp Nashville, a CS Mixer and whatever else we decide to do for Halloween. The following weekend in November is our company retreat to Gatlinburg, arguably one of the top perks for working for my employer.

Even without the season tickets, I hope to up my number of games to a few more a month. I went ahead and picked up NHL 2K11 since the last edition I bought was back in 2008. Since the Predators have swapped goal tenders and captains since then, I figured it was time for an upgrade. The game is frustrating on the shooting end (the reviews speak to that), but it is quite an improvement over my older copy. I do not get to play video games nearly as often as I used to, but 90 percent of the time I do, it is a hockey game.