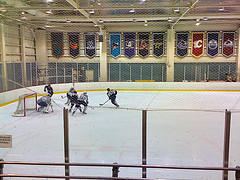 The drywall below the rafters was littered with holes, most were conveniently puck sized. It was not until a rising shot rang off the cross bar and then ricocheted off one of the light fixtures that I noticed them. Most were probably put there before the rink was fully enclosed with netting, although at first glance it did not look like that stuff could stop much of anything. The light fixture was still swinging a bit from the impact as the players were given their final instructions for the day.

Training camp will be wrapped up almost as soon as it has started, with the first pre-season game scheduled for Thursday. Watching the familiar faces mixed in with a those desperately fighting for a roster spot really drove it home that the long summer was finally coming to an end. The same could be said for weekends filled with watching football, even if we do not particular care about either team that is playing. If I were more of a baseball fan, perhaps I would not be so eager to welcome fall. Already having a ticket to the first pre-season hockey game pretty much seals the deal, though. Summer 2010, I hardly knew ye.

Aside from sports, the summer has been an interesting one. I have learned tremendous lessons about time management, efficiency, etc. as my work schedule became more and more hectic. I celebrated my first year with the company at the very end of August, and I already have started drawing comparisons between what was happening a year ago versus today. Even with things as busy as they have been, I am still having a lot of fun. I also entered my late twenties, so my list of things to do before I am 30 (if such a list actually existed) will either need to get shorter, or I really need to get on them.