A night at the roller derby 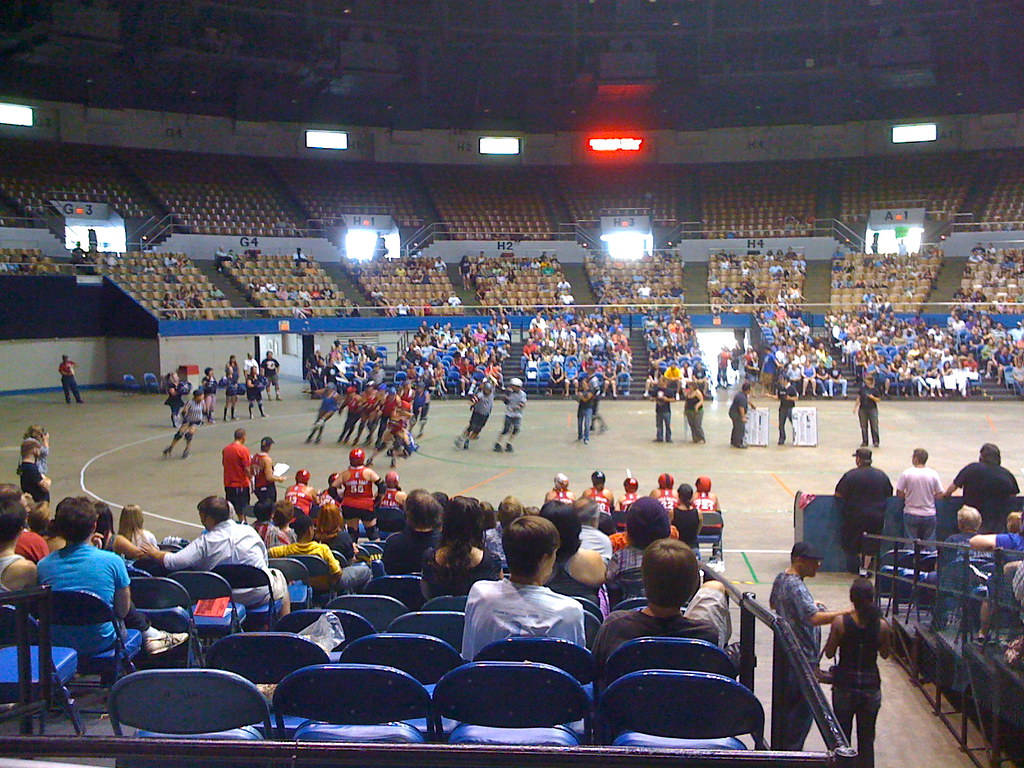 This afternoon I finally set foot in the Municipal Auditorium, something I had managed to avoid doing in the entire time I have lived in middle Tennessee. The Bridgestone Arena (and its half dozen or so other names) opened three years before I got to Nashville in 1999, so every downtown sporting event or concert I had ever attended had been at that venue. One look inside and you can quickly tell why the city was well-advised to build a new one. At a 9,700 maximum capacity, it is half the size of Bridgestone (19,395 for basketball) but not quite double the size of Jackson, Tennessee's Oman Arena (5,600), the closest municipal performance space to my old home town. Even UT Martin's own Kathleen & Tom Elam Center/Skyhawk Arena boasts 7,000 seats. We have been conditioned to think that anything booked at Municipal either ran into a scheduling conflict for the Arena, or the promoters knew they did not have a prayer of filling the seats. Unless they are Creed's promoters -- in which case, they were delusional to think anyone would pay to hear that crap anyway.

That sets the stage for tonight's event, a bout between the Nashville Rollergirls and the Fort Wayne Derby Girls. Roller derby as a sport has witnessed a resurgence in popularity in recent years, but still operates largely under the radar of most casual sports fans. They had played for a few years at the Fairgrounds pavilion, but with the political turmoil surrounding the closing of that facility, the team moved to Municipal. Oddly enough, moving to a larger and more centralized venue meant larger attendance (they easily sold out bouts at the fairgrounds, but had 2,384 strong show up last month). Some longtime fans bemoan the fact that it seems like things are going more "mainstream" (think family friendly, but they still played an explicit mash-up featuring "99 Problems" during intermission), but I really had nothing to base it off of. The nicknames are still hilarious.

Had it not been for a co-worker's photography project and seeing that a few other colleagues from the Nashville interactive community (my fancy way of saying "the ladies from Nashvillest" and friends) were going tonight, I probably would have skipped out of tonight's event. I am a hockey fan, but I wagered that anything that involved skates, brutal hip checks and the occasional scrap sounded like it would tide me over until the pre-season started next month. The fact that it involves women in fishnets is just an added bonus (Side note: I tried to get Samantha to come to this one, but she needed to catch up on a few projects with tight deadlines). The team is currently nationally ranked, so it also came with the notion that I could watch a team that might have a shot at winning it all.

Even having watched tonight's doubleheader, I still have little idea of how things were actually scored. I did figure out when something happened that was worth cheering (like the girl with the star on her helmet, called a "Jammer", passes everyone else) or was bad news (like when the same girl is tossed in the penalty box). The strategy of the game slowly became apparent, but I do not quite think I will be rushing out to get a version for the Wii anytime soon. It comes as no surprise that it is a rough sport -- I saw at least two rough lower-body injures (knees and ankles) and a skate loose its front set of wheels. One injury even happened during warm-up drills. Even with my limited understanding, I at least could do simple math -- both Nashville teams ended their games with more points than their opponents.

The Nashville Rollergirls wrap their season at an away game, so it will be several months before I get the next opportunity to go watch a bout. In the mean time, I will simply laugh a bit at the players' and coaches' nicknames.