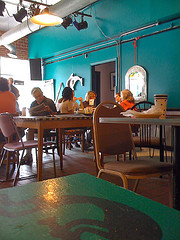 Earlier today I was sitting in a coffee shop in midtown Memphis, waiting on two Eggos and a fruit plate. The place was an eclectic mix of everything you expect to see in a non-corporate coffee shop, complete with the colorful characters that frequent such establishments. I cannot pass judgment, as I am one of those people. We had just checked out of the hotel room a half hour earlier and were meeting up with Samantha's friends from the area and folks from our college days. A similar scene had played out on Friday night, when we met up with a different set of friends from college in downtown Nashville. Both times it was very chill, very laid back, and the topics of conversation surprisingly heavy.

I sat there twirling the metal stand I had been given with my order number while Samantha sat outside with the rest of the group. The Memorial Day weekend did not look like anything I had thought it would, and I suppose that is just fine. It was fun, but not in the exhilarating, high octane way that I am more accustomed to. It was a lot of talking, a lot of sharing and even more thinking. I spent more time on the inside of my head in the last seventy-two hours than I have in a very long time. The twirling metal stand was more than just a symbol of the food that was taking far longer than a fruit plate and two Eggo waffles should -- it was where my eyes were fixed while my mind jumped from conversation to conversation, place to place, situation to situation.

I am not ready for the work week ahead, but I am hopeful it is an easier one with the abbreviated schedule. I need to take a vacation to flush out some of this general anxiety that always takes hold in the summer. Anyone down for a road-trip?