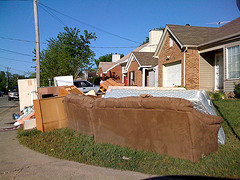 "Should this mirror go?" "Yeah, the water was at least that high, and the wood is probably starting to mold." I set down the prybar that I had been using in a futile effort to remove the carpeting edging and placed both hands to either side of the mirror. I stopped suddenly. "Wow."

On the mirror, the dirt was very pronounced right at where the water line had been. I let it hang there for a moment more. I could see the reflection of the volunteers streaming in and out of the house on Neill Street in East Nashville, a large trash pile looming large behind them lining the city street. The small, two bedroom house was starting to empty of its contents, with all of the carpet removed from the living room, the kitchen mostly empty. Empty, except for the remnants of the Hanes t-shirt box that had held the family's Christmas tree. Mud was still caked everywhere.

The scene was similar to a dozen or so others from earlier this morning and yesterday. Volunteers entered houses clad in yellow shirts, gloves, face masks, carry tools and cleaning supplies. Five to seven people would work for an hour or so before moving on to the next work site. The piles of trash strewn across the yard along the street would grow five-fold in that time, all of it the personal belongings of complete strangers, ruined in the flood.

This is parts of East Nashville. With widespread devastation in Bellevue, downtown, Opryland and other places, it is tough to catch much of a glimpse of it on the evening news. Finding these work sites is often a challenge without a GPS. But when you do find it, it is unmistakable. Some folks are lucky. Their basements flooded, turning everything that had been kept in storage into toxic trash. For those folks, it is a matter of getting rid of stuff they probably had not seen in years. Others, it is their entire home and living space. In the six or so hours each day that I was on a worksite, I have seen homes with minor flooding (12 to 16 inches in the basement) to catastrophic losses (the home on Neill Street had at least 5'6" of water in it). Look up from your computer and mentally picture where that would be on your wall. Now figure out how much stuff you would still have.

The work has been hard, but it has not been without a few laughs here and there. Yesterday, I worked in one side of a duplex owned by a retired couple. Our job was to remove the first four feet of drywall (I later learned this is because drywall comes in four-foot sections) and the insulation behind it. The reason to leave the second four feet intact was because it did not get wet, and could be retained when the contractors came in to finish up. My hammer slipped, nicking the top section. The son of the couple just laughed, saying sarcastically "Don't worry man, it's just my inheritance." The gravity of the matter was that his parents had no idea how they would pay the $5,000 deductible per unit before their insurance would kick in.

When working a townhouse on a different street, our team scooped up the contents of the living room before ripping out the carpet. It was obviously the home to people with children, as toys, books, crayons and more were all scattered about. While carrying out the dishwasher, one of the volunteers found a Justin Beiber CD, covered in mud next to the door. "Well, it looks like this, uh... Justin BYE-ber disc isn't any good anymore." Another volunteer carrying an armload of garbage dryly said as he walked by, "It was already ruined long before the flood."

At a house on Joseph Street yesterday, we waiting for a FEMA agent to enter the home before we began work. She methodically walked throughout the house, taking notes on her tablet PC and snapping pictures with a small digital camera. The questions were about how high the water had come, where the circuit breaker box was located and whether the chest freezer had been knocked over by the water, or if it had been turned over when they entered the home. I could not pay much attention to what was happening in between arm loads of soggy clothes. The two residents stood at the fence line while we worked. I would imagine that being in the house would have been tough for me had I been in their shoes. They could barely even look at the trash piling up on the street.

To us, the flood meant trash. Our job was to get as much of the stuff out of there as quickly as possible before deadly mold set up in the home. But it is not that simple. Our groups were also dispatched with volunteers experienced with pastoral care. Because the flood was not just an event that turned their belongings to trash. It was something that has forever changed their lives, mixing hope among the tragedy of losing everything. Each box was more than just a soggy stack of old clothes -- they were memories that the volunteers could never really connect with, but as vivid as ever for the those that called the place home.

No matter what building we entered, it seemed to be a universal truth that everything that touched water had to be put out to the curb. Except the Bibles. If you waited around long enough or if the right volunteer saw it before moving things out, there would be a single family Bible left on the porch railing. Faith is a powerful tool in coping with hard times. I am not sure if the book was left for the homeowner as much as it was for the volunteers who walked by it on every trip back from the street corner.

The weekend has ended without feeling much of a sense of accomplishment, but it was not for a lack of trying. There is still so much work to be done on the long road to recovery for Nashville, and even longer for the cities and counties to our north, south and west. The efforts of volunteers has been inspiring to many people who call Tennessee home and beyond. The reality of volunteer work is this, though. You will have times when it does not just simply come together, personalities clash and effort is wasted. But I believe that anyone who tries to help a neighbor in their time of need has made a difference in a world often called cold and cynical.

For many volunteers, the work week will start tomorrow just as it always has. My mind will be wandering down a street that, before this weekend, I had never even heard of.