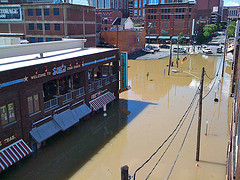 I sat there by the water's edge, gazing into it as we awaited our next move. The light tower from the Nashville-Davidson County Office of Emergency Management reflected in the pool of water. A few days earlier, I would have been sitting on the edge of a parking lot. Tonight, I was peering down into a three to four foot sinkhole back-filled with water.

The coordinator for the sandbag effort plodded slowly through the water. His objective was to shove a retractable fiberglass poll into the mud to mark where the drop-off began. A few hours earlier, an OEM deputy face-planted into the hole, and despite the disappointment of the onlookers who wanted to see that happen again (it was damn funny), he managed to mark the spot to avoid.

He likely did this because the hundreds gathered at MetroCenter were starting to thin out. They were tired of waiting on the last truck filled with sandbags. If they were going to go home, he wagered, he did not want to be responsible for what others may find hilarious. I would not call the department volunteers deserters -- they had already gone above and beyond what many had or were able to do in the response to the flooding.

The volunteers were called together via an e-mail sent to everyone who had signed up through Hands on Nashville, the organization that the Mayor's Office has partnered with to coordinate relief efforts. I love it when a vibrating cell phone suddenly results in an all-afternoon effort.

Somewhere near the Nissan dealership, there are two newly constructed sandbag walls. The first was uphill from the parking lot below. Officials hoped that the wall would be enough to keep the water at bay if the main levee were to be overtaken. Some of that was already happening with a gurgling hole keeping the parking lot nice and flooded. Ours was aimed to help curtail the water if it were to come over the edges as well. There was a time late this afternoon where that was a very real possibility.

We learned shortly after leaving that the river had already crested at 51.85 feet, almost 12 feet above flood stage. Our project was primarily a precautionary measure if the water levels had reached 54 or more feet, as they would have begun spilling over the levees. Had that happened, there was a fairly solid chance that MetroCenter would have met the same fate as downtown and the Opryland area -- spending the next few months trying to put the pieces back together again.

Samantha and I are exhausted, aching, and fortunate. I really need to go in to work tomorrow, provided that the roads have cleared enough to do so. Our office is not too far from MetroCenter, and there were tons of closures from water rushing over the roadway. Check out my photos from today.