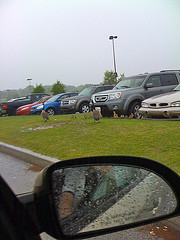 We sit on a dry street in East Nashville, completely oblivious to the catastrophe that is striking Nashville and the surrounding areas. Strike that, we are hardly oblivious -- at this very hour, a police scanner is rattling off streets and units numbers, and Samantha is furiously hammering out the details on Twitter and Facebook. It is a hard habit to break, the odd desire to share information, even when scarce, about major events. Being geographically removed from the areas hardest hit in West Nashville and Franklin, I do not have any harrowing tale of water rescues or flooded roadways. We were home yesterday long before any of that took hold. Instead, we were listing to a weather radio blare out the names of surrounding counties and the funnel clouds that were bearing down on them.

So, this is a 100-year flood. It is going to be days before the final tallies are announced in deaths, displaced households and millions/billions of dollars in damages. The aerial view of the River Plantation condominium development were the toughest to take. My first Nashville job required me to ride/walk/drive right through there. Now, all you can see is roof peaks and tree tops jutting out of the greenish water.

The office has a bit of water damage from a leaky roof, but should be up and running tomorrow. Getting there is a completely different story, as I would somehow have to cross the Cumberland River to get over to Germantown. I have already decided that I will be telecommuting tomorrow. Samantha is wanting to spend some of her employer-approved community service hours to help out, but we are not even sure if we can get to the areas that are in need of assistance. The Mayor's Office has all but begged people to stay off the roads, closing schools and freezing the bus lines until further notice.

Given that I spent quite a bit of time near the Internet today, I thought I would share some of the stuff I checked out.