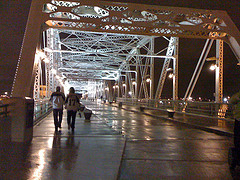 So that is it. The Nashville Predators drop the deciding Game 6 to the visiting Chicago Blackhawks, ending their playoff run in an all-to-familiar date on the calendar: late April. The hockey club has proven very reliable at getting to the postseason, but only mildly effective at doing anything when they get there. Their first accomplishment is not being swept by any team that they've played (Detroit, San Jose and now Chicago). This year it was finally winning a road game.

Baby steps, true. But for a franchise in its eleventh season, I have to wonder how long "baby steps" can support a fan base that dreams of nothing less than a Stanley Cup in Music City. Considering the off-the-ice saga that seems to dog the Predators every summer (sale of the team, pending move to Ontario, bankrupt billionaires, arena leases), it seems improbable that they will be shaking these "small market" blues anytime soon. Perennial underdogs.

At lunch today, a group of co-workers were discussing the challenges that Nashville has in supporting two professional sporting teams. The Tennessee Titans enjoy an embarrassment of riches in fan-support, player talent, and raw cash to lure in the talent that makes or breaks them. Their fans often forgive-and-forget when it comes to missing the playoffs, or if they too are bounced out of the early rounds. The Predators are perhaps the exact opposite -- zero payroll to speak of (the salary cap is a non-factor), few sellouts and even fewer dollars to market the team to new fans. Again, perennial underdogs.

So now what happens in the off season? There will be a handful of unrestricted free agents to either reel in or cut loose. There is the draft, but unlike football the players will either go back to their college or off to an AHL team to prove their worth before making the jump to the NHL roster. There will likely be a few trades, but doubtful it will be for a big name (see: zero payroll). I am even betting on a random Predators investor to be charged with fraud. You know, just to keep it interesting.

The 1-for-30 on the power play through six games tells of one area in blatant need of improvement. Reliable offense is always in short supply in our defensive-minded team, so a playmaker line has to emerge through trades or development. Goaltending is not that much of a question mark any more, with Pekka Rinne keeping his team within reach for most of the games he was in the crease. Not sure if Dan Ellis gets traded to be a starter elsewhere, or if he is content getting 20-30 games a year in the relief role.

Obviously, if you have read this far down, it is apparent that I am disappointed in how the season ended. What I am not disappointed with is the times I got to hang out with friends at the game or at viewing parties in living rooms or bars. It was a great season, and only one team can advance in the playoffs.