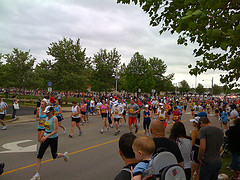 I tried my best to remain calm despite the crowds and the frequent violation of "personal space" by the spectators. It did not help that the rain had started to fall, and my only umbrella was in my car a little more than a mile away from where I was standing. They had come to watch friends and family cross the finish line of the Country Music Marathon here in Nashville. As for me, I was doing the same, but I was fairly sure that everyone had already completed the course by the time I got there. Still, I had never been on hand for the event, and it was all that was on my schedule for the day. I really just wanted to go and snap a few pictures.

The last week has been a rather interesting one. On Tuesday, I witnessed a Stanley Cup playoff game that may unseat my favorite hockey game I've ever watched -- the other being a game in a past series against the Detroit Red Wings. The building was intense, the play was good and the scoreboard showed 4-1 Nashville Predators over the Chicago Blackhawks when the final horn sounded. The following night, I went to a political event with Samantha that involved a lot of music, food, drink and dancing (I took part in everything but the dancing). Thursday was another playoff hockey game, but the result was less than stellar. So watching the end of a marathon seemed like a good way to close out the week.

When I walked up to the marathon finish line, the fifth and sixth place runners had just arrived. The storms were rolling in, so these runners were lucky enough to complete the course before the race organizers abbreviated the race. I did not know anyone running the full marathon, but I did know a number of people completing the half marathon. As I made my way over toward the half marathon finish line, I saw a wide range of emotions: pain, relief, joy, disappointment and enthusiasm. There was surely some reason behind each -- perhaps they pushed their body too far or crossed a personal milestone on the road to a better self. I have run a handful of 5Ks now, but those runners never showed this much raw emotion. I guess in those meager 3.1 miles, you treat everything as "business as usual."

There were dozens of "teams" that were running for various causes. The American Heart Association and the The Leukemia & Lymphoma Society both had a large contingent, as did Tim McGraw's foundation for brain cancer research in honor of his dad. Some wore shirts for a family member, a workplace or a school. Everywhere you looked, there was some reminder of the symbolism that this race held for each participant.

But of all of them, there was one that really stood out to me. There was not a t-shirt or flag for this cause, or a team or a tent. It was just a middle-aged woman, holding a picture over the railing at the finish line. In the picture, there was an older woman with a bandanna on her head. Nothing else was around it to give it context. The bandanna likely covered the hair loss from chemotherapy treatments -- I could not come to any other explanation. I found myself ignoring the runners came in to cross the finish line, and just looked at the picture. Having lost someone who was very important to me to cancer in the last year, I could feel my heart breaking for the woman and whomever she was waiting to cross the finish line.

A few minutes later, the announcer called everyone's attention to a scene just a few feet from the picture -- a young couple stopped suddenly before the finish line, and the man dropped to one knee. My cynical self immediately thought "attention whores," but then I chuckled a bit to myself. Here they were, a few feet from a powerful scene expressing that life is fragile, beginning theirs anew together. Dozens of other runners swept by, each holding something in their heart that brought them out to run today.

The rain began to come down harder, and the race officials announced that the full marathon runners that had not yet completed the course were being diverted to finish with the half marathon (about six or so miles short). Most of the full marathoners (they wore blue bibs) were obviously disappointed, but still ran hard to the finish. Two guys, however, argued with a race official when they realized they were not getting the full course. "I didn't come all this way to run 20 miles!" one shouted. By now, lightning had already cracked on the horizon, and the police were urging everyone to make their way to the shuttles or their cars. The men continued to argue as other runners darted around them before abruptly turning around and running backwards on the course. I have no idea where they were going, unless it was find whatever 3.1 miles looked like before coming back. I'm guessing they were just running for themselves.

After realizing that everyone I knew had long since come and gone, I started back toward my car. My phone measured the distance out at a little over a mile, as I had parked on Fatherland Street and walked to LP Field. In spite of the heavy rain and the distance, the stroll went rather quickly. I was too lost in my thoughts on everything I had witnessed to notice.