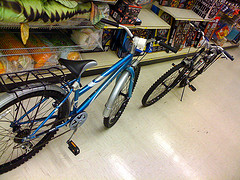 The alarm had gone off two hours prior, but getting out of bed this morning was a chore and a half. We had watched and celebrated the Nashville Predators nab their first road playoff win over the Chicago Blackhawks late into the night before, and the older we get, the earlier our bedtime is supposed to be. My plan for the day was sparse, but I really wanted to check out the Earth Day Festival at Centennial Park like we did last year. While Samantha was getting ready to head out, I started to straighten up the apartment and took out the trash.

Today was a beautiful day, with the temperature hovering in the low 70s for most of the day with bright sunshine. As I walked back from the trash cans, I noticed that Samantha's car door was not all the way shut. I opened the door to lock it, and saw the pile of of stuff in the passenger seat. We had a bit of a guest overnight, likely walking through the parking lot and looking for unlocked cars. Whoever he or she was, he opened the door, sat down and emptied the glove box and center console. Not finding anything of value, he moved on. Nothing was stolen, not even chargers for our phones. After reaching that conclusion, I put back where it came from and cleaned out the floorboard of the car from the leftover Diet Coke bottles from her last two weekends on the road.

I went in and told Samantha what had happened, and called the police. While nothing was stolen and the car was not damaged, I wanted to make sure that the incident was at least part of the statistics in case there was another car break-in overnight. The dispatcher took my information, and said an officer would be there soon. I kept cleaning out the car and making sure there was not anything that I remembered leaving in it. The person could not have spent long in the car, as the backseat was left virtually untouched (same beach towel in the seat, paperwork in the back pockets still in place). The officer rolled up about ten minutes later. My opinion of Metro response times has greatly improved.

He was a friendly guy, gesturing me to come to the side of the squad car where he rolled down the window. He asked a few simple questions ("When did you find it like this?," "Are you certain that nothing of value is missing?,") as well as the expected reminder about locking your doors in any neighborhood, not just East Nashville. "I've worked in this neighborhood for 19 years, and I can tell you it has really changed," he said. "But you're still going to have things like this happen in every neighborhood. You just gotta be smart."

We talked a bit longer while he finished up the paperwork, noticing the UT Alumni Association plate that my wife has on the back of her car. "I went to UT, but it was time to go," explaining that he, like me, had a bit of an extended stay. He was talking about Knoxville, but I decided not to bring up that I attended UT Martin. I signed the report, and he gave me the slip of paper with my case number on it. As frustrating as it is to have somebody go through your stuff, I am relieved that nothing was in there to steal, and that whoever it was did not damage the car in the process of not finding anything to steal.

We drove to the post office, where I learned that our Earth Day plans were changing -- we were finally going to go get bikes. When Samantha and I moved to East Nashville, there were three stereotypical requirements for living here: skinny jeans, station wagon and bicycles. Neither of us can do the skinny jeans part (there's a joke here about cheap hotels, but I will save that for a later time), and the car situation is fine as it is. The bikes, on the other hand, have just been a question of when and how much we wanted to pay for them. The answer was "soon" and "not much at all."

We drove to the Academy Sports in Rivergate to grab two $125 bicycles. Many good friends of ours pleaded with us to get "real" bikes, but we went with the economy line of Huffy cruisers. Nothing fancy, nothing to write home about, and probably will have a resale value of about $25 a piece when they inevitably fall apart. I sent a message to a friend of mine with a Honda Fit to help us get them home -- as Alison put it, her contribution to Earth Day was transporting two bicycles in a vehicle that gets 38 miles to the gallon. The three of us chilled at Ugly Mugs for a bit before getting on with the rest of the day.

I attached the various accessories that Samantha had picked out, aired up the tires and adjusted the seats before heading out for a test ride. Mine rides fine, Samantha's still has a few kinks to work out. Not being too terribly mechanically inclined, I am hoping whatever is wrong is a simple fix.

All in all, a productive but strange day.