Picture on a jar 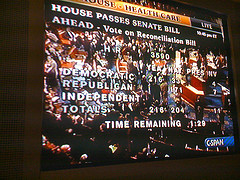 By the time you read this, there will be little to add to the conversation. The U.S. House voted to pass the Senate bill from November, effectively assuring that a year of tumultuous debate on the proposal will be drawing to a close once the President signs the measure in the coming days. All the same, I have a few comments to add.

First, allow me to begin by addressing my dear friends who are either politically agnostic or have become so tired of this particular debate that reading another word would harm our friendship. To those folks, tune in next week for another topic, and just mark this one as "read" in the feed reader. I took a quick survey of Twitter tonight to see where opinions stand, and was not really all that surprised by the results. Three or four say that they want to un-follow anyone talking incessantly one way or the other. A number of others quietly deleted that casual acquaintance from their list for disagreeing with their position on the matter. The rest are cheering or jeering, or avoid talking about it altogether. The same thing happens on election night every two to four years.

The reason why I continue to support the efforts to reform our nation's health care system is because I have met more people along life's journey that have been financially and even physically ruined by a system that demands profitability to stay afloat. Words like "pre-existing condition" are the enemies to that profitability, and only a system where claims are denied and risks are limited can the Wall Street's goal of "maximizing shareholder value" be achieved. I believe in the free market principles of supply and demand, except when it claims the lives of thousands who are unable to afford basic care in the process.

I believe that we cannot in good conscience turn a blind eye to families and indivduals that did nothing wrong with the way they managed their money, but suddenly find themselves on the brink of bankruptcy because of an injury or illness. It is hard to say it is somehow their fault for being born with a debilitating disease passed down through generations. If somehow you think it is their fault or some sort of punishment, I beg you to reconsider your value system.

Think for a moment about the picture of the little girl with Leukemia taped to the side of a jar at the convenience store, with a plea from her family to give so that they can make ends meet. It could be your or my picture on the side of that jar, with our own plea for help to make it through to another sunrise. We can either take decisive action like the measure that will soon become law, or we had better stock up on jars and pictures -- just as, you know, an insurance policy.