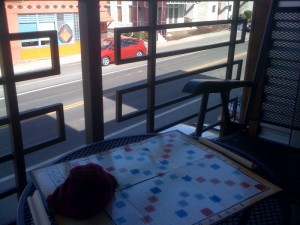 The words "unseasonably __" have come to mean little so far this year, but they are being tossed around anyway. We have had two or three snowy/icy days lately that brought the city to its knees (or out to play, depending on your perspective). And today, in February, we had 60 degrees and sunny without a cloud in the sky. Being a weatherman in middle Tennessee must be the most frustrating and thankless job in America.

Yesterday morning we went to a legislative breakfast on Jefferson Street hosted by Sen. Thelma Harper (TN-19). It seemed like everyone I ran into was running for Juvenile Court Clerk, as at least four of the eleven candidates were in attendance. After a great breakfast and a lengthy update of what is happening (and not happening) this session, we quietly slipped out the back door.

We picked up another piece of furniture from ModerNash, bringing our total to two new chairs, a coffee table, a bookcase, a nightstand, a six-drawer dresser and the new three drawer-dresser. If IKEA were a publicly traded company, I wish I had put part of my retirement funds in it before we moved. I guess on the plus side, if I ever need another hobby, apparently "furniture assembly" is making the short list. The good news is that only a few things do not have a "home" yet in our storage-strapped single bedroom apartment.

After finishing up with the dresser assembly, we went to an ordination service at our church. The candidate was a young woman that chairs our outreach committee and works with victims of domestic violence and abuse. I have never been to such a service before. I guess I had assumed that simply graduating from a seminary or divinity program fully qualified you to be a minister. This particular service had much more of a ritualistic nature to it, where the candidate receives a robe, a stole, hymnal and other such items prior to receiving the notation in the order of service as "Reverend." There were many moments where you could feel the collective tears begin to well up in the eyes of all gathered. It was a very inspiring service.

Both yesterday and today have been gorgeous, although I can hear the rain begin to fall outside our bedroom. This morning we walked to Mad Donna's (a restaurant) for brunch, debating how soon we needed to pick up bicycles (the final verdict is to hold off until at least mid-March). A mile or two worth of walking through the neighborhood is a welcome change from how we would have spent a similar afternoon this time last year. We even managed to sneak in part of a Scrabble game before the afternoon crowds at the two neighboring restaurants became too much of a hilarious distraction to finish.

I can hardly wait for spring to really begin.