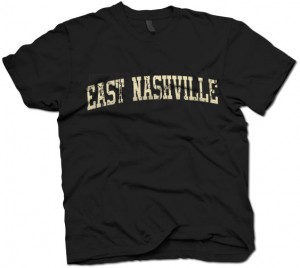 It was still there on Thursday morning as I wearily walked to my car, but the warmer weather of the last few days finally put away the remains of the tiny snowman the kids downstairs had built next to the bush. We had all survived the Great Flurry of 2010, one that only kept me working from home for half a day. The bitter cold was more of the story than snow and ice, which is why the snowball had been hanging around for so long.

Last Sunday, Samantha and I signed a lease on a new apartment in East Nashville. We might not have realized at the time, but now a gigantic digital clock now floats over our heads everywhere we go. The time on that clock counts down to the day we have to get all of our stuff out of one apartment and into ...

Not necessarily the next one. Every time anyone moves some things make the transition, others do not. For us, more than the average percentage of of our property will be sold, given away or trashed. That time has finally come -- when you chunk the dorm-room era stuff and either replace it or decide it was not that critical to have in the first place. As the next place is a single bedroom, we are learning exactly what we really need to keep. That lesson simply reads, "not that much."

Sentimental items rarely keep the same sentiment after a few years. Old Rolling Stones? Keeping four or five issues, chunking the rest. Hand-me-downs from relatives? Not that great in the first place. Kitchenware? Logo apparel? CD racks? There's a pile of stuff that will likely require two trips to Goodwill to get rid of it all. Many of our larger pieces of furniture are being donated to the fraternity for Scholars House.

The process is not a fun one, but it is cathartic in a way. We managed to fill this 900-plus square foot, two bedroom apartment with a lot of stuff we never wanted or needed. I feel something approaching excitement at the idea of simplifying our possessions. Clearing away the senseless clutter in our lives should really be a daily habit.

The next place, while smaller, has a lot of added bonuses. It is trendy and modern looking, but that is not really what appeals to me. The location is right in the middle of where we spend a good portion of our free time anyway -- down the street from our church, within walking distance of our favorite coffee shop and restaurants. Mostly by being "not Goodlettsville," it is more likely that we will be able to get out and do more without the added expense of having to drive 15 miles to do it. While Samantha's three minute commute is now going to take around 15, my 30 minute commute is dropping to about seven. If I want to come home for lunch, it is just a quick trip over the river from Germantown.

The location was ultimately what swayed us away from our original plan. We had talked to two of the high-rises downtown about moving. The prices were within our range -- it actually irritated us that one of them would be less per month than if we were to go month-to-month at our current complex. The thought behind moving downtown was that if we were to ever move to Chicago or some other major city, urban living might be a necessity. If that were the case, we wanted to try it out in a city we already knew. All that said, I really was not all that excited about becoming a one-car household nor was I ready to shell out the $100 extra per month for a second parking space. But I was coming to terms with it. Had it not been for a friend of ours telling us that the other apartments were leasing, there is a fairly good chance we would have gone another route.

I am really looking forward to having the whole process over with, though. My office area (another casualty that will not be at the next place) is impassible with boxes, crates and paperwork. Somewhere in our closet Samantha has already picked up a shirt that says "East Nashville" in big, varsity type. I think she has been ready to go for a while.