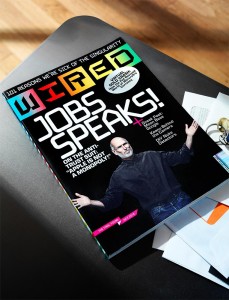 My subscriptions to Wired magazine and Rolling Stone likely give a bit of insight into my interests and personal beliefs. I will leave the talk of sex, drugs and rock & roll for another time, but I do have a bit of commentary on a recent change in Wired.

They seem to have canned "Found: Artifacts from the Future".

The "Found" feature is a single page in the magazine that has a heavily photoshopped image with references to technology or conditions that the artist speculates may exist in the future. A popular theme is to show an ordinary task, such as driving to work, enhanced with non-existent or augmented technology, such as a heads-up display that fills the entire windshield with eye-controlled widgets alerting to an uninsured driver or being late for a meeting. The concepts varied from the wildly absurd to the achievable technology that would improve our lives.

I cannot find any explanation in either issue as to why the page disappeared. I picked up on one visual clue that it may be coming to an end last month (July), when a cover of the magazine appeared with the words "The Final Found / July 2018". This month's issue instead has an advertisement for the Sony Vaio.

Without a reason for its demise, I must resort to blaming Sony Corporation.